The City of Anacortes is committed to providing quality water for all residents and making sure its citizens can rest assured of its safety and superior quality. 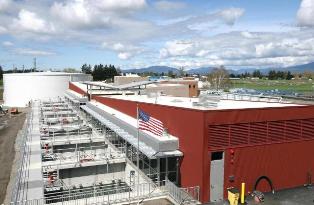 The City owns and operates a regional water treatment plant on the east side of the Skagit River near Mount Vernon. The plant was built in 2013 on the site of the previous plant.

Features include a ballasted sedimentation system for pre-treatment, eight filters, an above ground clearwell, and a high-service pump station. The plant has the capacity to produce 42 million gallons of water per day, expandable to 55 million gallons per day. It serves approximately 56,000 residential, commercial and industrial customers.

Raw water for the treatment plant comes from the Skagit River. Pumps at the intake station on the west side draw the water, send it through traveling screens and into a 42-inch pipe underneath the river to the plant.

The raw water enters a coagulation tank at the start of the Actiflo system where small particles agglomerate into larger particles or floc. Next, the water flows into an injection tank where micro-sand and polymer is slowly added. The water, coagulant, micro-sand, and polymer are mixed in a maturation tank allowing the floc to increase in size and weight. The flocculated water enters a settling tank where the particles settle to the bottom and a circular scraper rakes them into a sump in the center of the basin. From the sump, the material goes into hydrocyclones, which separate the sand from the solids or sludge. The sand recycles to the injection tank and the solids flow by gravity to lagoons. Water from the settling tank flows up through tube settlers, over weir troughs, and into a settled water mixing chamber, where filter-aid (aluminum sulfate or polymer) is injected as needed. 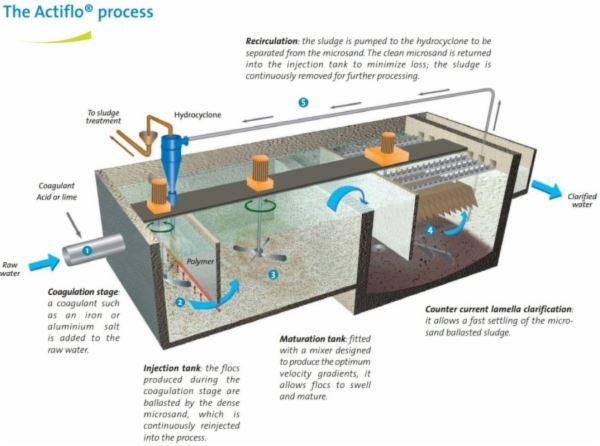 From the settled water mixing chamber, the water flows through a filter influent channel onto dual media filters comprised of granular activated carbon and sand. The filters remove all remaining particles.

The filtered water is injected with sodium hypochlorite between a low-lift pump station and a clearwell water tank used to provide chlorine contact time for disinfection. A high-service pump station pumps the treated water from the clearwell to the distribution system.

Sludge from the Actiflo system, along with solids back-washed from the filters and pumped to the lagoons, settle to the bottom while the water is removed with floating decanters. 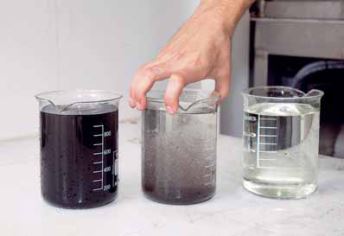 The Decant Pump Station sends the settled water to the river. Settled solids in the lagoons are infrequently removed and hauled to landfill for disposal.

The entire treatment process is continuously and closely monitored. The plant is staffed 24 hours per day, 365 days per year, by certified water treatment plant operators. Water samples from each phase of the process are tested according to a strict daily schedule at the plant’s laboratory. Independent laboratories conduct additional tests.