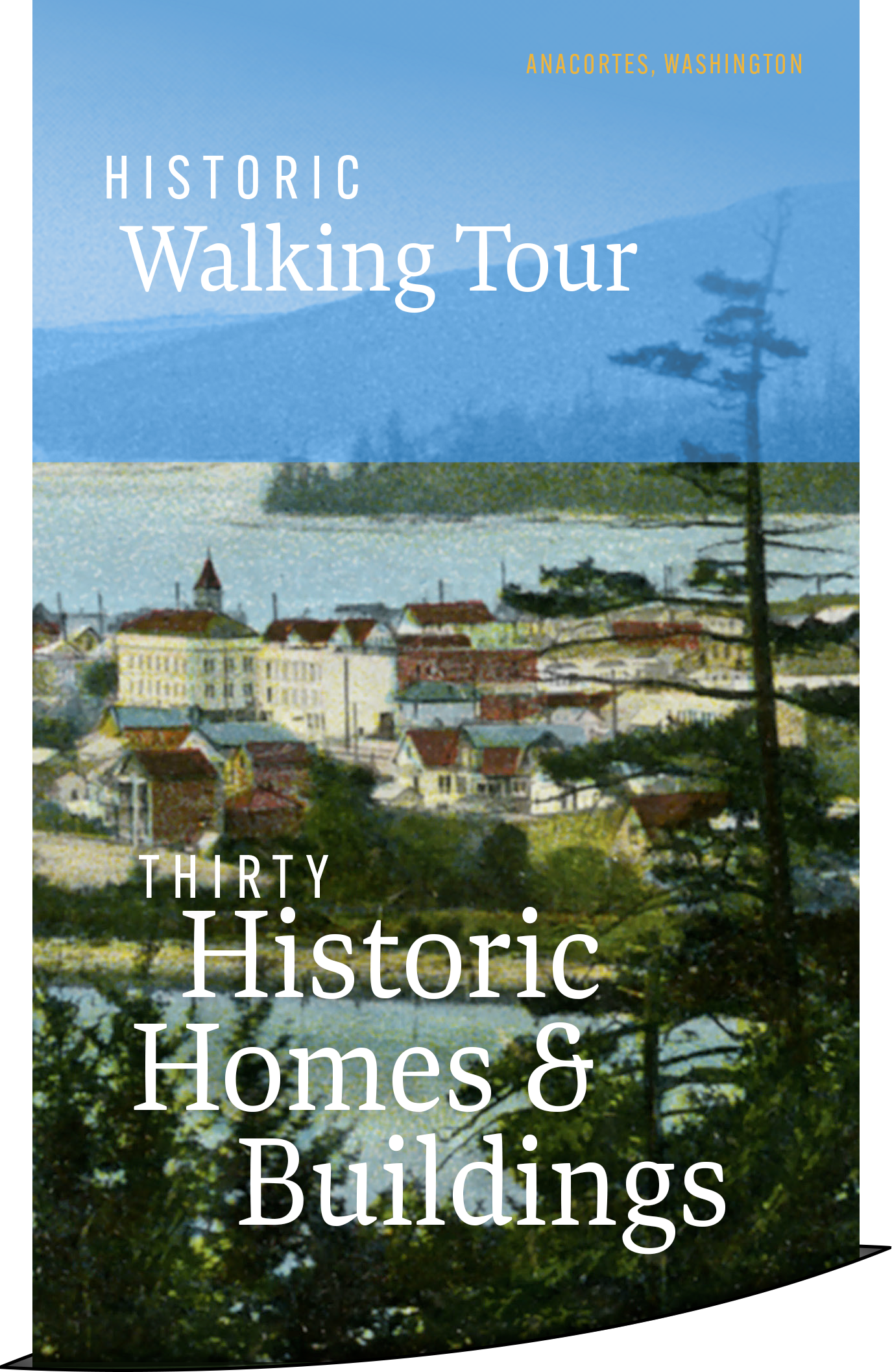 This walking tour map identifies thirty of the many historic buildings in our downtown core. The tour is organized so that it can be enjoyed as one 90 minute walk or in two 45 minute loops (listings 1-19 and 20-30).

This area has been home to the Samish and Swinomish tribes since time immemorial. Spanish and British ships explored area waters in the 1790s. Early American settlers arrived by the 1860s. Amos Bowman and his wife arrived in 1876, and in 1879 he established a post office named “Anacortes” for his wife Anne Curtis Bowman.

Town founders had a big idea: to be the terminus of a transcontinental railroad! In 1890, population grew from 200 to 2,000 on speculation. Some streets and buildings you will visit on this tour were constructed during this time. But the boom ended, and large brick buildings housing banks and hotels emptied. Yet by the mid-1890s, hundreds of people were employed in salmon canning and codfish curing plants. Lumber mills thrived on timber from Skagit County and surrounding islands. Many homes you see belonged to mill and cannery owners. Since the 1950s, another shift has occurred with the arrival of two oil refineries, marinas, technology and tourist-based industries, boat building, motels, retired folks and artists, all enjoying our location and our heritage. 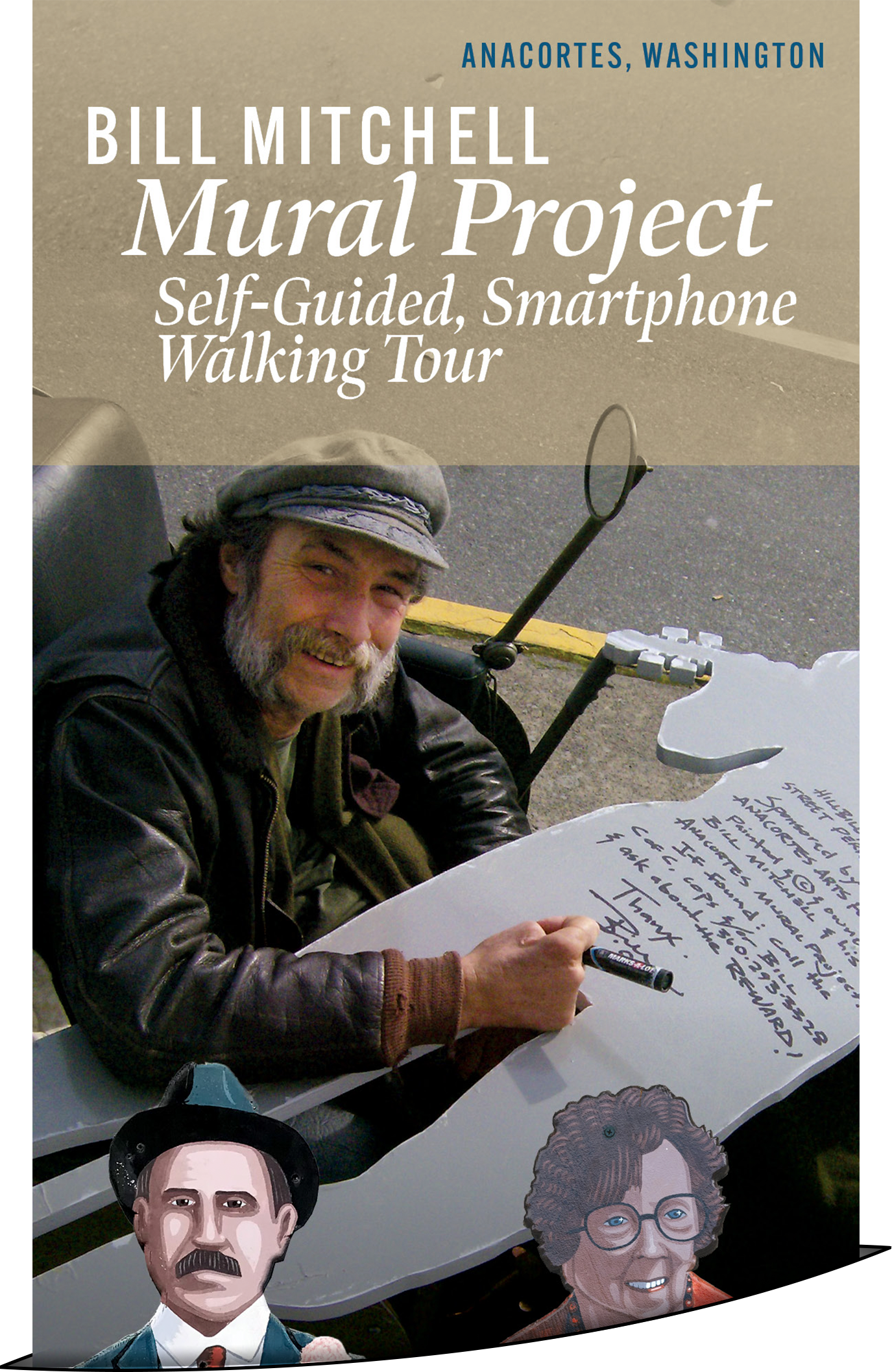 Our self-guided, smartphone tour of the Bill Mitchell murals can be viewed by visiting:

A Brief History of the Mural Project

In 1980s Anacortes, Mitchell along with a group of a couple dozen other community leaders banded together under the Anacortes Renaissance and Revival Confederation.

The intent of the group was to bring life back to downtown Anacortes during a period where the future of the town was somewhat hazy. This initial meeting is where the idea of murals first surfaced. Intrigued, Mitchell brought several images to the group’s second meeting, got a thumbs-up, and by the third meeting, took charge. Thus the Anacortes Mural Project (AMP) was born. The idea behind it was that the murals would not only draw tourists and business to Anacortes but encourage current downtown business owners to do their part in beautifying the area. “I had the time and the background, education, and experience to be able to head up a mural project and I had a work space.” Equally important was “enough talented friends that I felt I could put together a crew.”

The project’s 35 year lifespan would spawn over 160 unique murals, located today everywhere from the Port of Anacortes to the State Ferry. It could be said in that time the original goal of the Anacortes Mural Project has been achieved. Downtown Anacortes is more beautiful than ever, with plenty of heart and personality. Mitchell left Anacortes with a priceless gift that not only irreversibly changed the town, but helped define it.

For information on private tours of the Carnegie Gallery, Maritime Heritage Center, and/or the W.T. Preston Sternwheeler, please email us at: coa.museum@cityofanacortes.org or call: 360-293-1915.