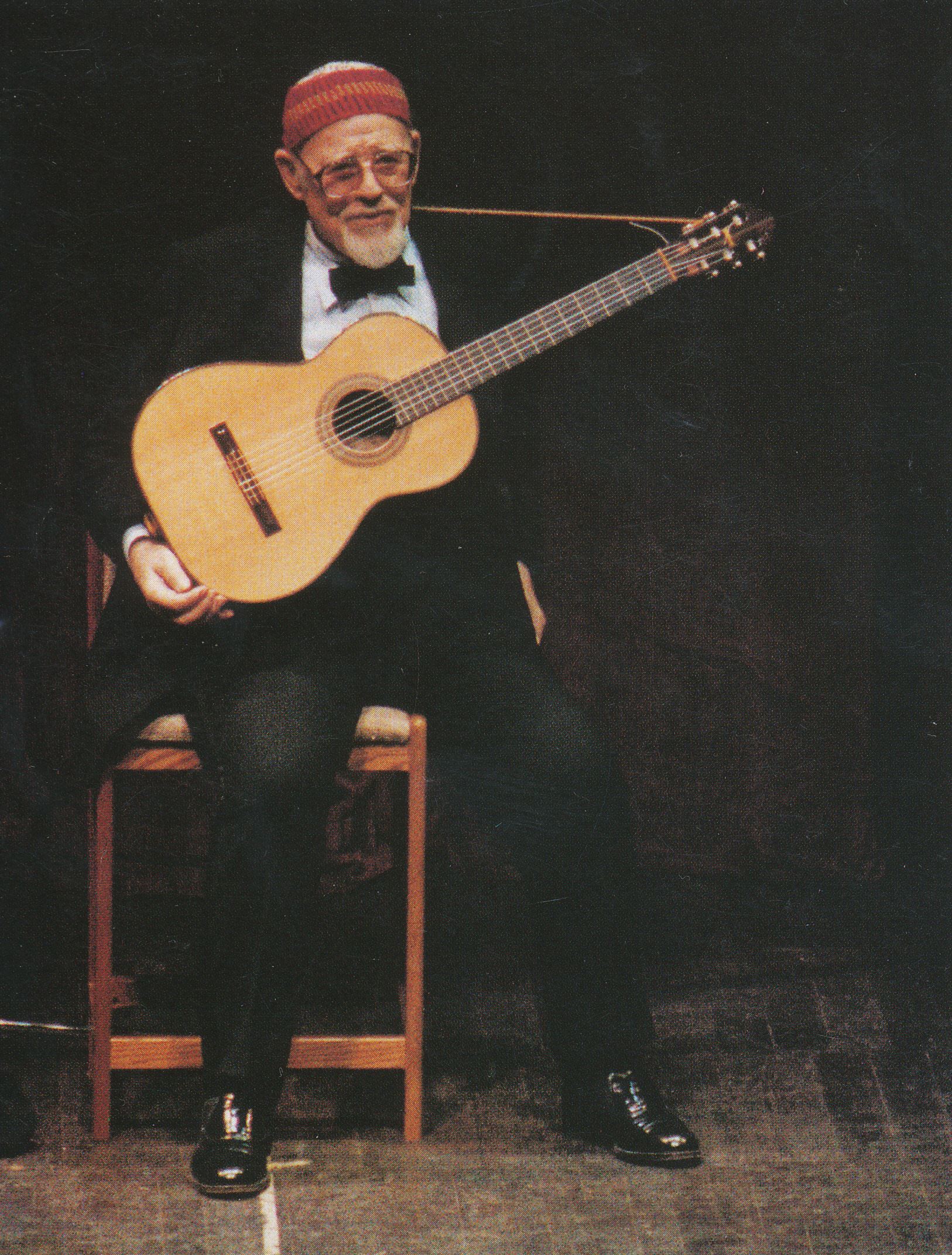 In 1989, so many stories were generated when celebrity Burl Ives and his wife Dorothy chose to make Anacortes their home that a letter-writer felt compelled to chastise the Anacortes American for violating the couple’s privacy. “Are we to call this newspaper the Anacortes Enquirer,” she asked.

Burl’s arrival took the community by storm. He was the first bona fide Hollywood superstar to take up residence here – in fact, the only one, unless someone has been incredibly effective at staying under wraps.

The letter-writer needn’t have worried. The Ives’ weren’t the kind of celebrities to hide in a compound, and they quickly dove into activities and causes in their new home town. In fact, they proclaimed their presence loud and clear each holiday season by displaying -- right in front of their home -- larger-than-life cutout figures of all the characters from “Rudolph the Red-Nosed Reindeer,” one of Burl’s most lasting contributions to American pop culture.

Among the high profile activities were historic events: Burl Ives performed his last solo concert at Anacortes High School’s Brodniak Hall in 1991, and his last concert of any kind was at Skagit Valley College in 1993. Both were fundraisers for local causes.

Burl Icle Ives was an American institution. He was born on Flag Day, June 14, 1909, in Hunt City, Ill., the sixth of the seven children of Cordellia and Frank Ives. His first paid performance was at age 4 (he made $1).

By the 1930s, he was an intinerant folk balladeer, well on his way to becoming an icon, forever associated with tunes such as “Blue-Tailed Fly” and “Riders in the Sky.” Children loved his songs, which often had a dark side, like good fairy tales: “I know an old lady who swallowed a fly … perhaps she’ll die.” He had a radio show, The Wayfaring Stranger, and his music garnered a Grammy award, plus two more nominations. A socially conscious performer, he survived the McCarthy Communist witch hunts, with a few scars. 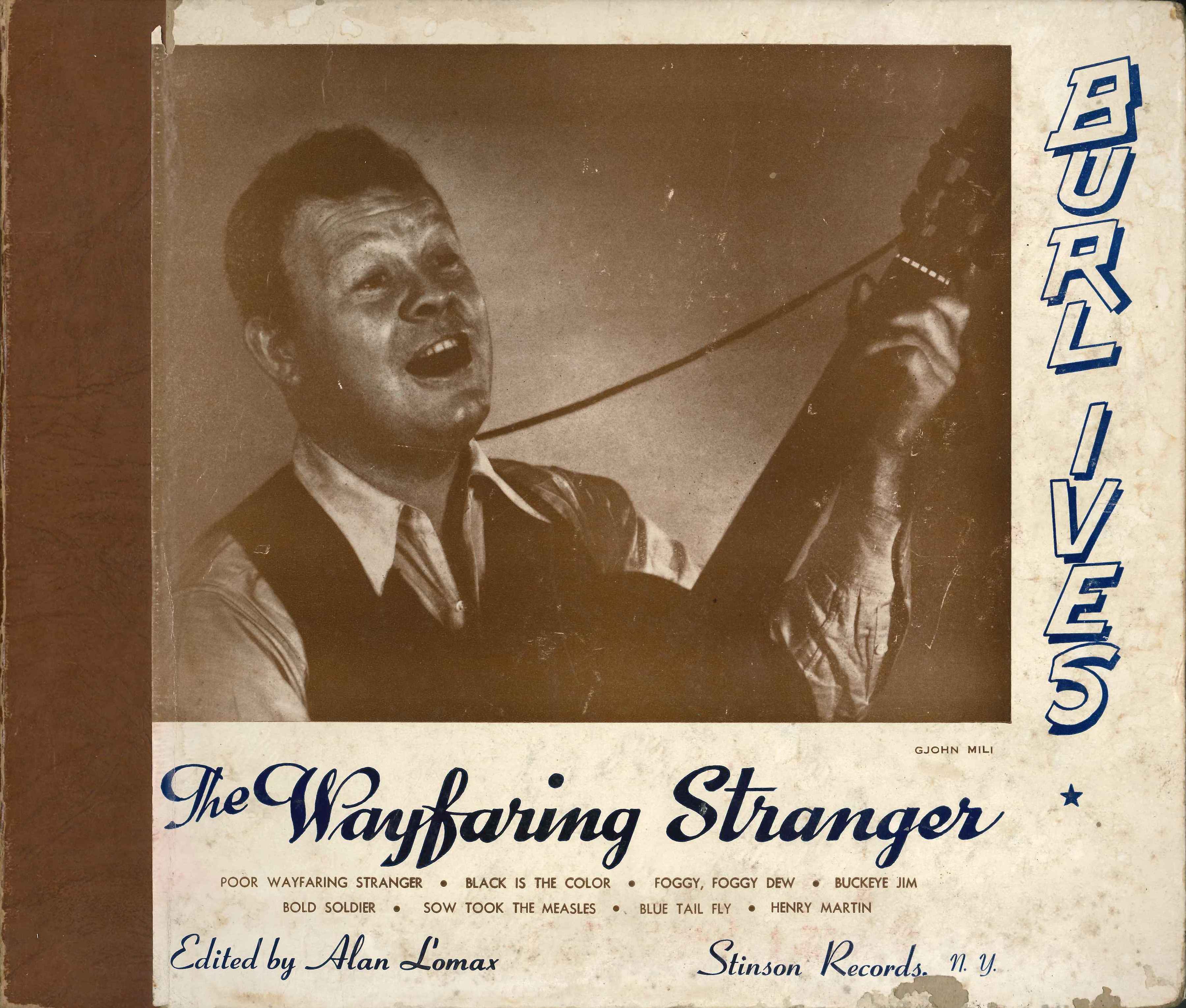 His talent wasn’t limited to music. He originated the role of “Big Daddy” in “Cat on a Hot Tin Roof” on Broadway, and reprised the role in the 1958 film (with Paul Newman and Elizabeth Taylor). That same year, his role in “The Big Country” (with Charlton Heston and Gregory Peck) earned him an Oscar for Best Supporting Actor. Many, many more films and television appearances followed.

For those of us born in the last 60 years or so, Burl Ives is indelibly associated with Christmas. Children still love the 1964 stop-motion animated holiday special “Rudolph the Red-Nosed Reindeer,” in which he voiced the role of “Sam the Snowman” and sang the songs, including the title tune and the classic “Holly Jolly Christmas.” He didn’t like talking about his career, but in a March 20, 1991 article, Anacortes American Editor Mark Carlson got him to comment about this program: 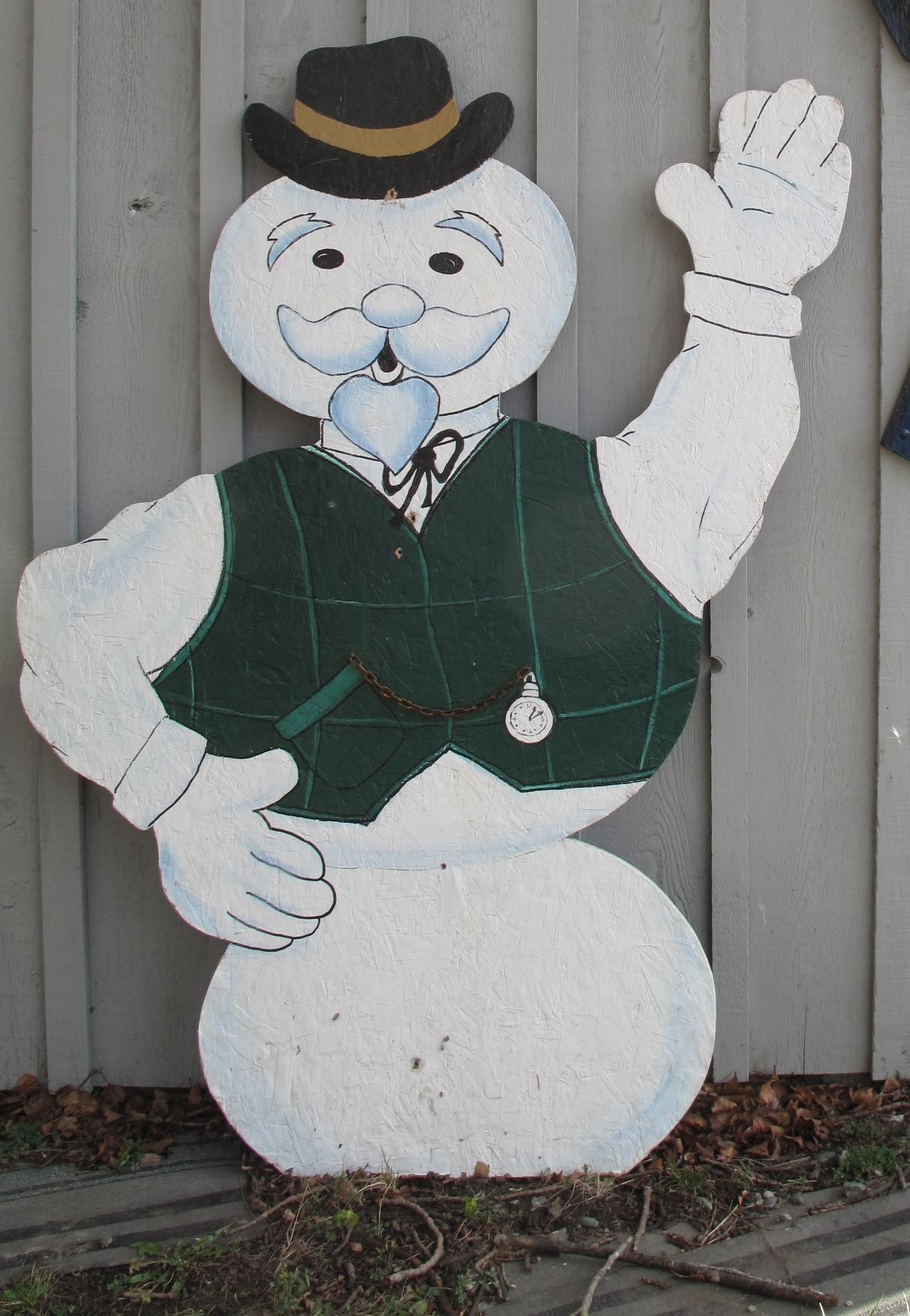 Sam the Snowman from Rudolph the Red-Nosed-Reindeer.

“I really love being the voice of Christmas to all those little children," he said with a smile when asked about "Rudolph the Red Nosed Reindeer."

Burl and Dorothy Ives purchased their house on Oakes Avenue late in 1989 and began renovations and the addition of a new wing to make the home more accessible. They had rented a home in Skyline while house shopping, then wintered in Palm Springs before moving into their home in 1990. They had discovered Anacortes when visiting Burl’s agent and friend, Marge Ashley, who had recently moved to a home on Cap Sante. Before long, some of their children and grandchildren also moved to Anacortes.

In 1990, Burl was successfully treated at Island Hospital for a serious chemical imbalance. From then on, he and Dorothy were staunch supporters of the facility. They showed their appreciation on April 6, 1991, when Burl Ives performed a benefit concert at Brodniak Hall. Tickets were pricey for that time: $20 for regular admission, and $50 for preferred seating and admission to a meet-and-greet at the Majestic Inn. About $20,000 was raised for Island Hospital’s pediatric services. This was his final solo concert, and the 81-year-old legend gave his all – charming and delighting the appreciative audience for 90 minutes. 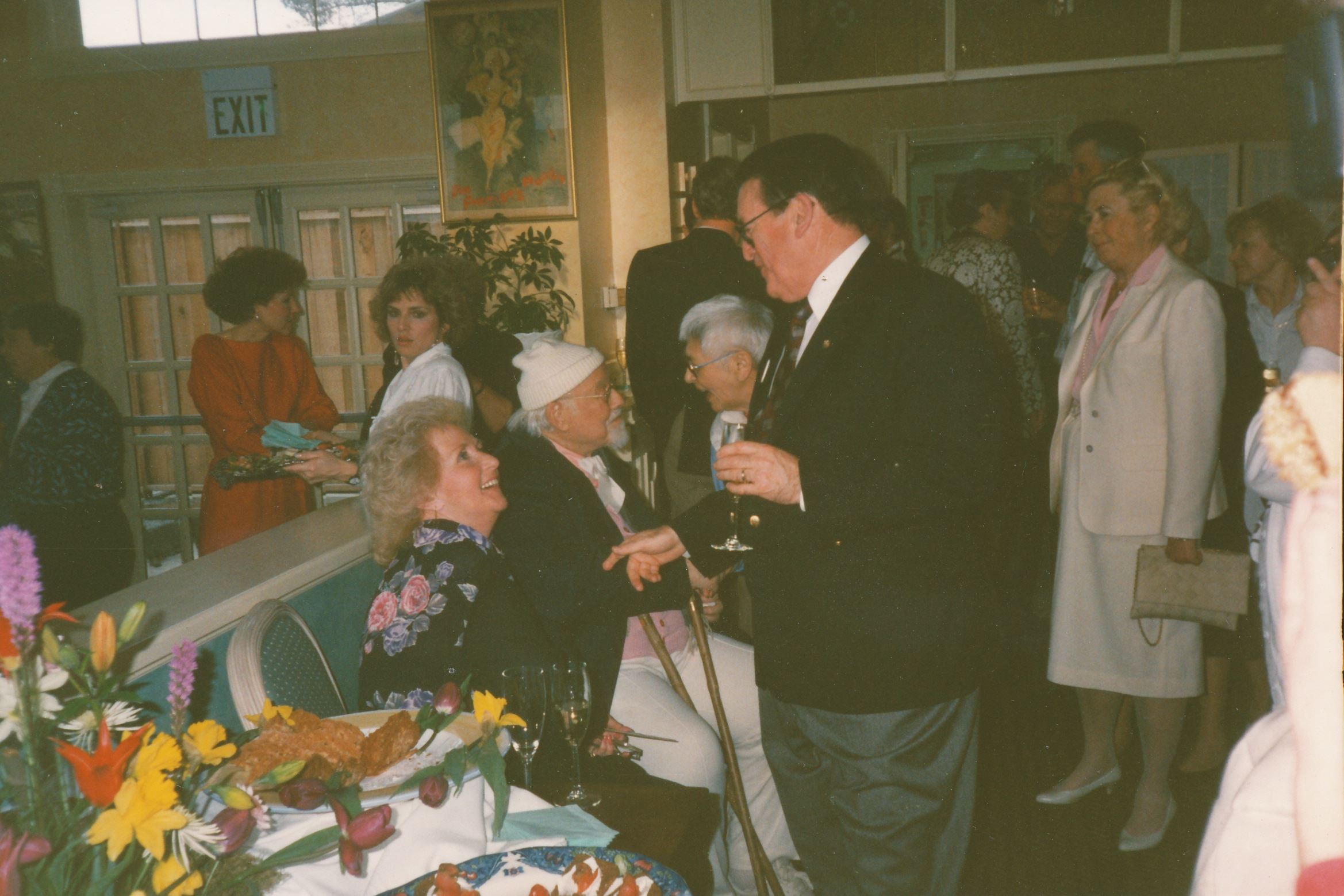 The 1991 Ives meet-and-greet at the Majestic Inn.

On Sept. 15, 1991, Burl and Dorothy Ives opened their home to the public during the 9th annual Home and Boat Tour. Conducted by the Dr. Samuel Gordon Brooks Auxiliary, the proceeds benefitted the free and part-paid care program at Children‘s Hospital and Medical Center in Seattle.

At the behest of Anacortes Mayor Doyle Gere, the Ives’ became involved in the creation of the Greater Skagit Community Enhancement Foundation in 1992. Dorothy Ives donated $10,000 to the foundation (today called the Skagit Community Foundation) for administrative expenses. Dorothy, Burl and Marge Ashley all were on the foundation’s first board of directors. An early grant recipient from the foundation was the Swinomish Tribe’s innovative preschool.

The foundation continues its good work to this day. In fact, a grant from the Skagit Community Foundation facilitated research on this article, through a grant that funded the digitization of Anacortes American newspapers, which can be searched online.

On Feb. 13 and 14, 1993, Burl Ives and Friends (including Angie Dickinson) presented a concert, “On the Old Front Porch” at Skagit Valley College. The event raised $40,000 for the Greater Skagit Community Enhancement Foundation. This was Burl Ives’ final concert.

In 1992, Burl presided as Commodore of the first-ever Anacortes Rokisoki Regatta, a race of wheeled carts decorated with a nautical them. Proceeds benefitted the Skagit Children's Residential Center. At that time a new CD by Burl Ives, “Some of Our Favorite Songs for Special Friends," was issued as a special release. Offered only by the Dr. Samuel Gordon Brooks Auxiliary for $25, all proceeds went to Children's Hospital.

During the holiday season of 1993, “Rudolph the Red-Nosed Reindeer” holiday cutouts make their debut in front of the Ives home on Oakes Avenue. Based on the characters in Burl’s classic Christmas program, the figures were commissioned by the Ives’ and painted by Eddie Strivens of Anacortes.

In 1994, Burl and Dorothy Ives were lauded as Citizens of the Year at the Anacortes All Service Clubs Luncheon, and that year the Skagit Pioneer Association made Burl an honorary pioneer. By then he was ailing with mouth cancer and unable to attend the events.

On April 14, 1995, Burl passed away at his Anacortes home. Dorothy asked that memorials in his honor be made to the Greater Skagit Community Enhancement Foundation. On April 23, 1995, Brodniak Hall was filled with friends of Burl Ives for a celebration of his life. Participants included singer John Denver and actor Eddie Albert.

Late in 1996, “Burl at Brodniak,” a video of his 1991 final solo concert, in which he played to his spellbound new friends and neighbors, was released. Proceeds from the initial offering went to Island Hospital Health Foundation. 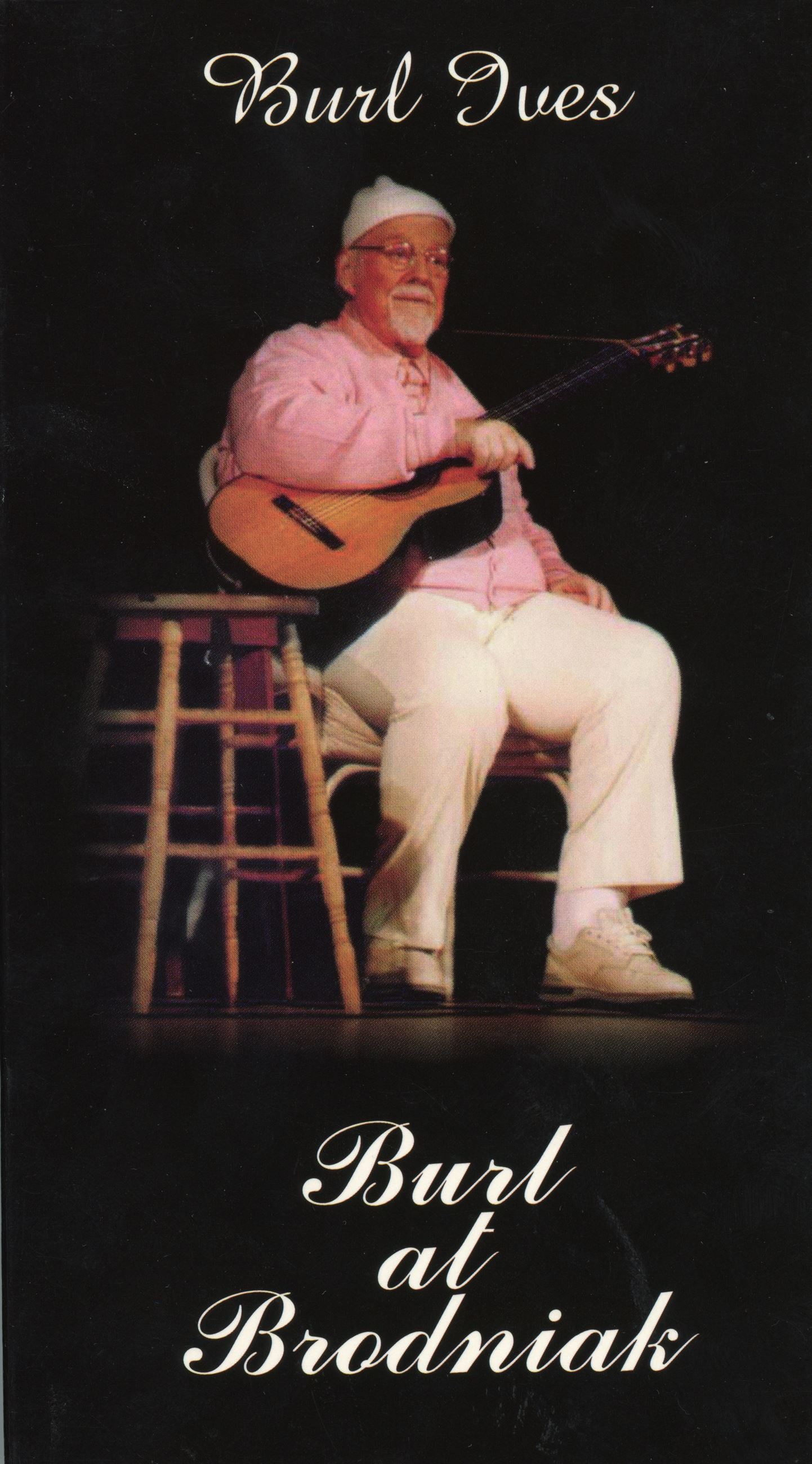 Dorothy continued to be involved in community events and projects for many years. She died on Aug. 31, 2016 at age 90. In her will, she left the “Rudolph the Red-Nosed Reindeer” cutouts – so beloved by the community – to the Anacortes Museum.