From Great Northern to Causland - The Building of a Park

Part One: The Great Northern Park 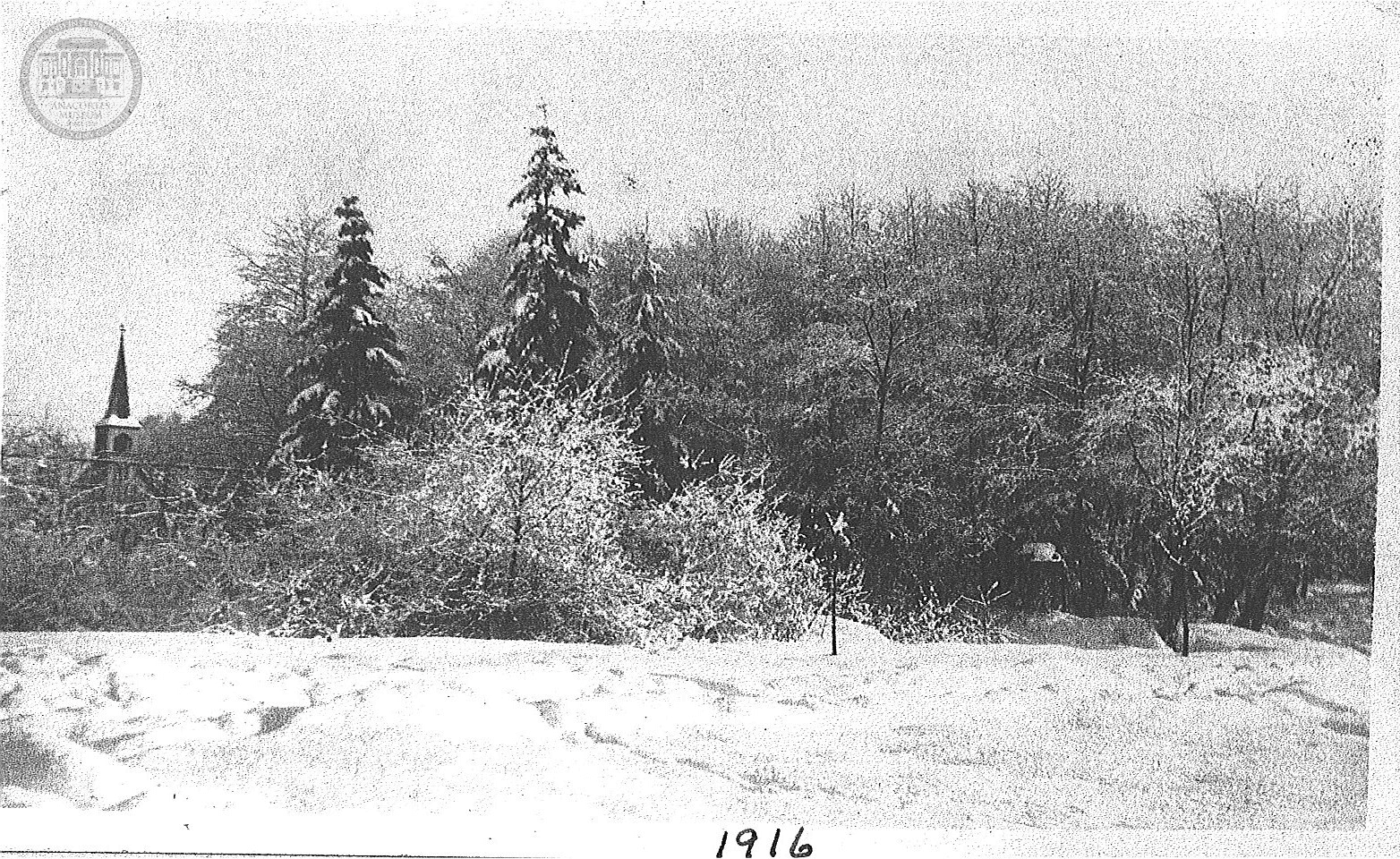 A landscape view of the Great Northern Park

“Prior to 1919, the park was a park-like grove, attractive but with many winding paths and a great number of natural growth…” - History of Causland Park

On September 10th, 1903 the City Council of Anacortes moved to purchase a bundle of 18 lots for $500 from the Great Northern Railway. The lots were located at block 75 on N avenue. While 18 lots were not the entirety of the block, it was certainly enough for the city's intentions -- to build Anacortes’ first public park. Due to the great bargain the railway gave to them, the city named their new purchase, “Great Northern Park.”

Both the city government and the people of Anacortes worked together to build the park from the ground up. By June of 1904, the Anacortes American reported that more than 100 days of work had been donated by the citizens of Anacortes in service of the park endeavor.  These workers cleared and landscaped the area and built a large bandstand that would come to be hated by the public. The bandstand in question was apparently rather thrown together. One Anacortes American commentator called it an “antediluviad relic of barbarism.” It did not last long. A little less than a year after the city bought the land, a grand opening celebration was held at the park on Independence Day of 1904.

“Eloquent addresses will be given from an elevated stage under the boughs of the maple and evergreen trees of the Great Northern Park.” - (Anacortes American, 6-9-1904)

Great Northern acted as a popular gathering space for the community in the years after it’s dedication. Development and maintenance continued and the beautification of the park was a frequent topic of discussion for the paper and city council. Many improvements were suggested over the years that never came to fruition, including a fountain and the purchase of an entire extra block of parkland that could be accessed via bridge. There was even talk of renaming the space, “Hogan Park,” after Anacortes’ first mayor, Frank V. Hogan. While this particular name change was not to be, old block 75 was not going to be known as The Great Northern Park for long. 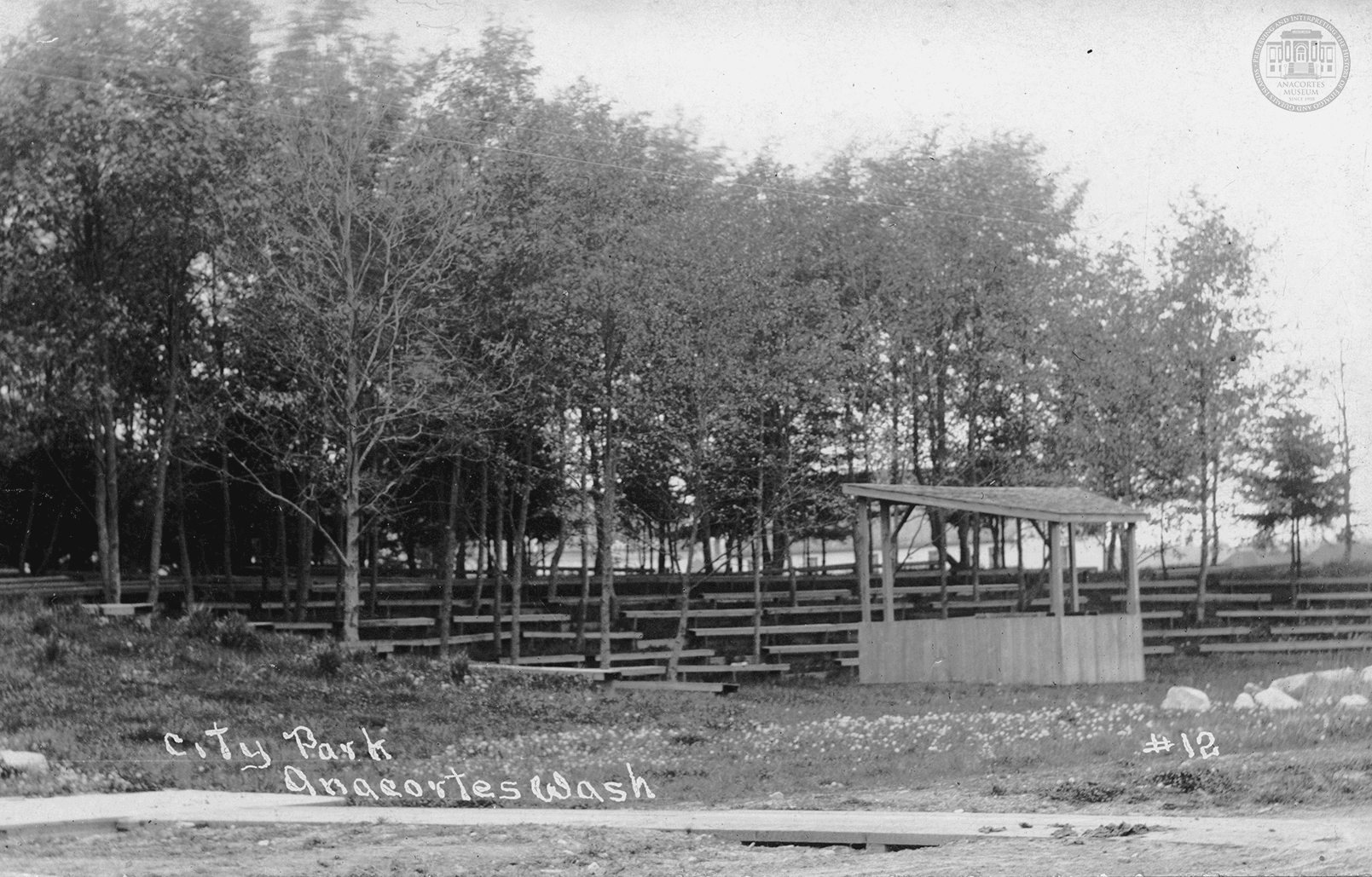 The Great Northern Park. Dated somewhere between 1910-1920. Pictured is the second

wooden bandstand placed in the park; it was sold in 1920.

Stories from the front lines of World War I shook the core of Americans everywhere. When tales started to funnel back home of the heroism of Anacortes’ soldiers, the idea came around that the Great Northern Park could become a memorial park for those locals who were lost in the conflict. The story of Harry Causland’s heroic sacrifice in October of 1918 captivated the public, and in late May 1919 the Thursday paper asked the question, “Why not Causland Park?” The name was an instant hit with both members of the community and the Great Northern Railway who gave the city their full support in changing the name. With Great Northern’s blessing, the community eagerly got to work on converting their park into a memorial.

“It is certainly fitting that America and American cities should recognize and perpetuate the memory of the heroic conduct displayed by our troops and individual soldiers in the world war.” - Louis W. Hill, Chairman of the

Board of Directors of the Great Northern Railway.

A committee was formed to create the new memorial led by Gus Hensler (a man who was previously instrumental in acquiring Cap Sante Park for the city). There were two main designs discussed among the board.The first was drawn up by a man named C.J. Marani. Marani suggested a set of four Grecian columns with bronze plates memorializing the fallen underneath. The second was drafted up by Canadian architect John Baptiste LePage. LePage had previously worked on a retaining wall in a park in Butte, Montana. The wall was composed of thousands of rocks in mosaic style, a design philosophy that spoke to many on the Causland Commission. The originality and beauty of the LePage design ultimately won the day and the Canadian architect estimated a cost of $6,000 for the project.

“It (LePage’s plan) blends extremely well with the landscape gardening plan and is a beautiful work of an original style. It is an odd masonry construction, in which varicolored rock is used to form the design. At the memorial itself the work becomes peculiarly artistic and bears a bronze plate.” - (Anacortes American, 1919, July 10)

The community put on a fundraising drive to raise park funds and it became a huge success through the help of both wealthy and working class donors. Labor unions encouraged their workers to donate a day's wage to the project while the more wealthy in the community were asked to donate in the thousands. The drive quickly broke its initial goal and by the end of construction around $20,000 had been spent on the redesigns. 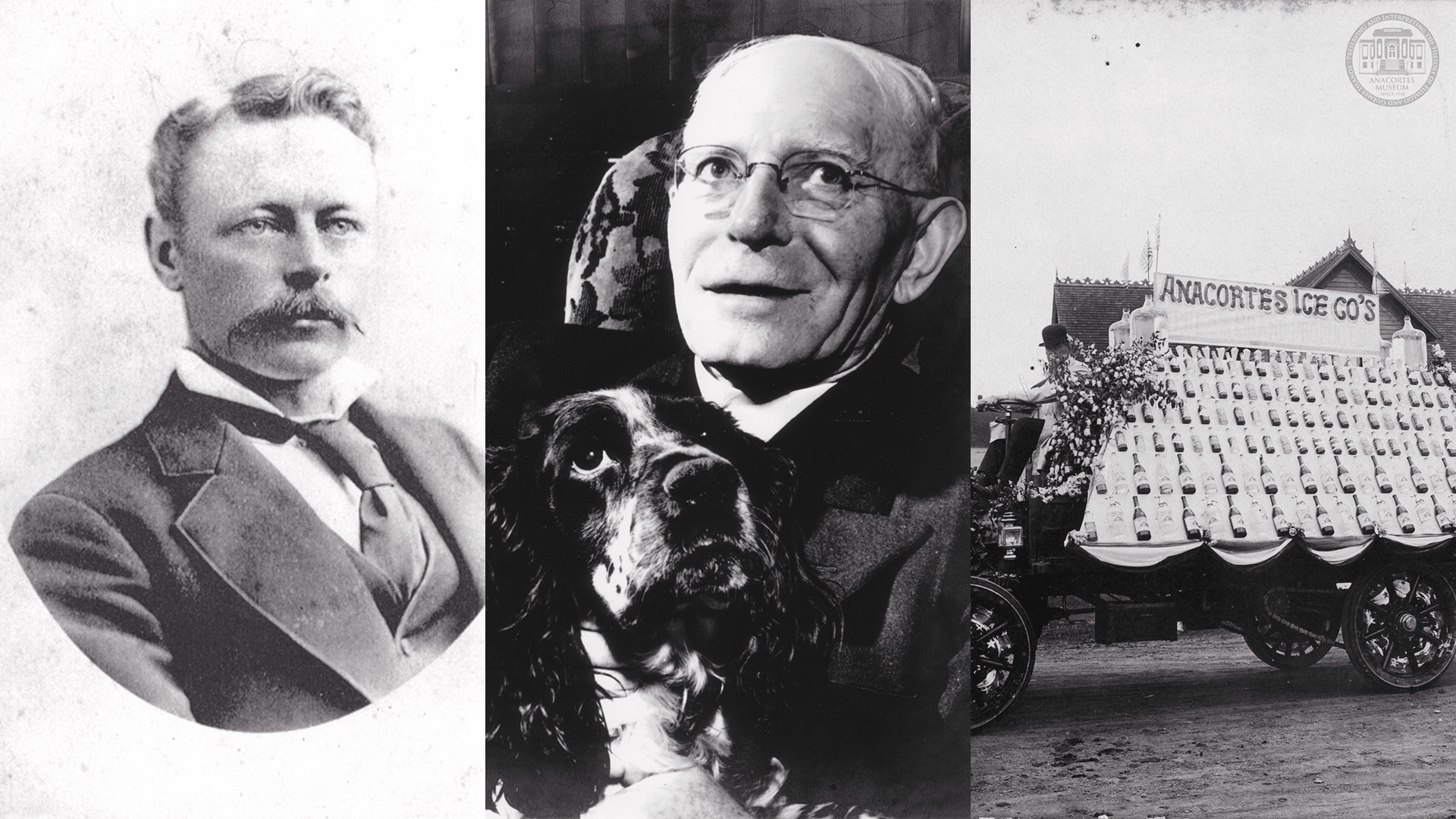 While this money was being raised, Jean LePage and his team of local labor union volunteers were working on gathering stones from around the area. The red rocks are tuffaceous argillite from the Ginnett rock quarry on Fidalgo Island, the white rocks are mostly quartz, and the brown sandstone is from some of the neighboring islands. All were worked into designs in the rock walls, then hand-placed and set in cement. From 1919 through 1921, the amphitheater, bandstand, and bulkheads were built out of thousands of locally gathered rocks. It has long been theorized that LePage’s design ideas were inspired by Spanish architect Antonio Gaudi. There is little evidence to this theory, however, and it is more akin to a local legend. On September 25, 1921 a dedication ceremony celebrated the completion of the park -- a new and great Anacortes monument.

Named in honor of

This Park is dedicated to the honored memory

Of the brave sons of Fidalgo, Guemes, Decatur and

Cypress Islands who at the call of their country

Entered the service and gave their lives

in the Great War for World Wide Liberty 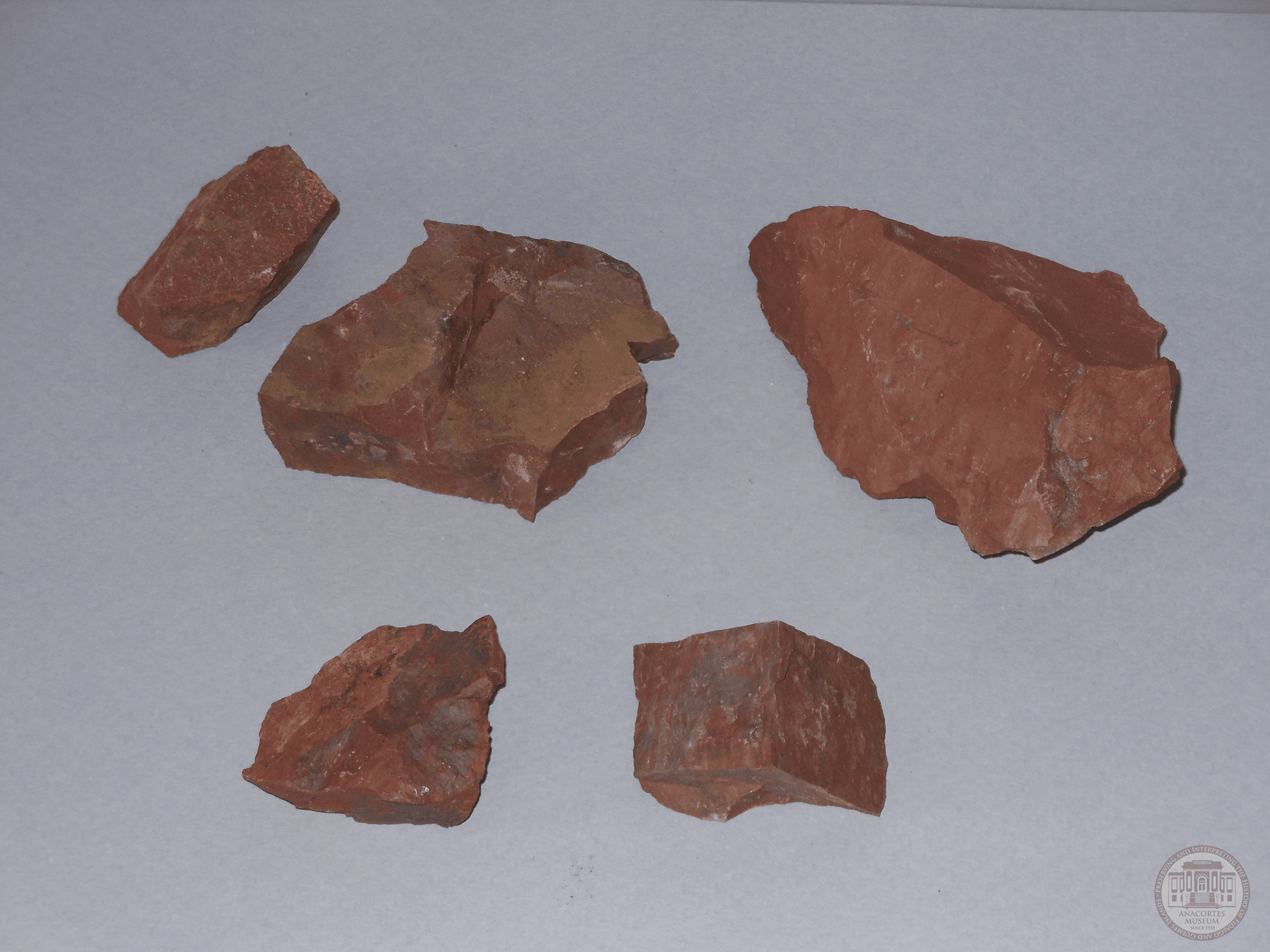 Original Tuffaxceous Argillite from the Ginnett Quarry southwest of Campbell Lake. Used by LePage and his construction team. 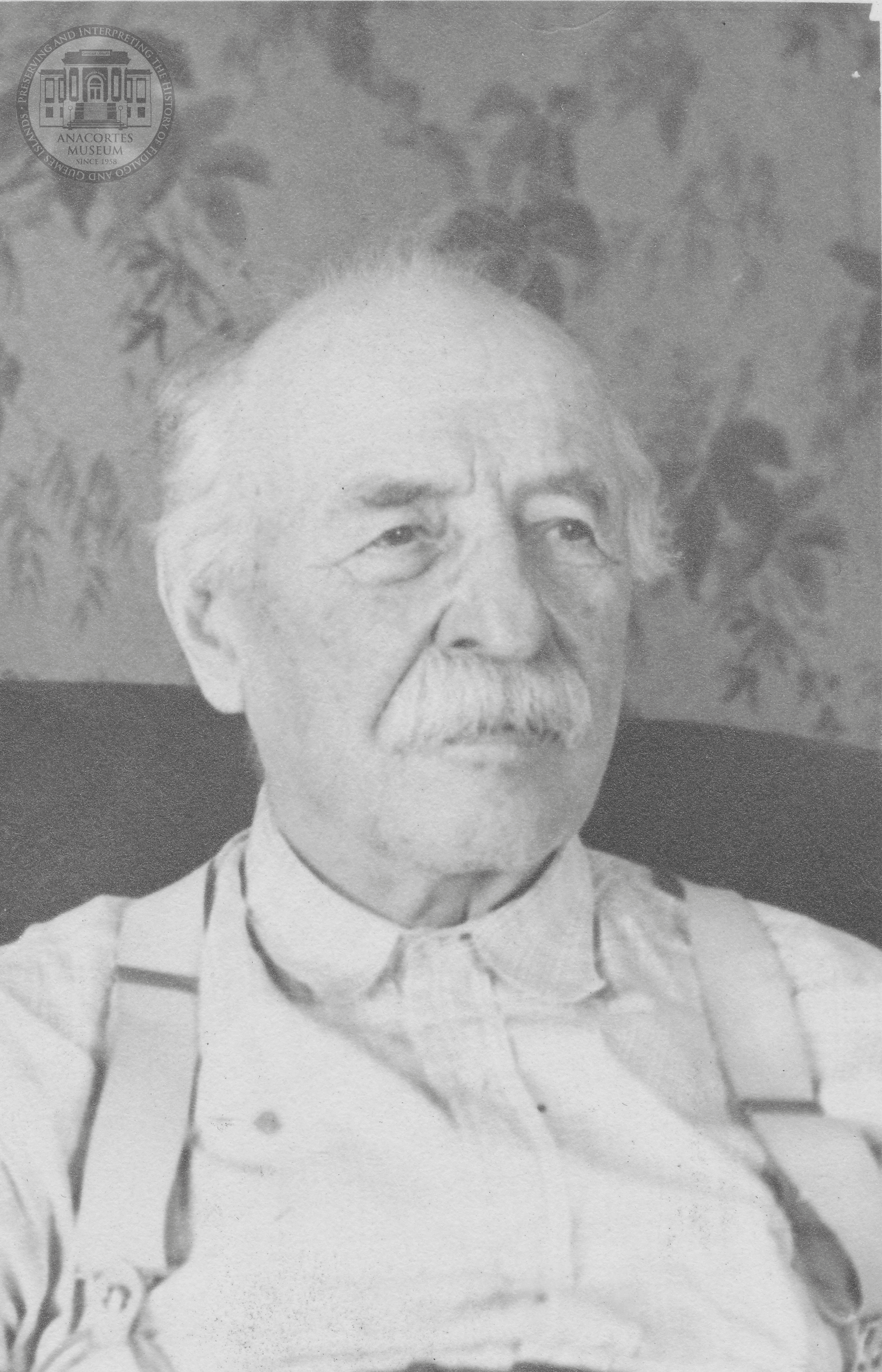 Jean Baptiste LePage was born in Rimouski, Quebec in 1857. Trained as an artist, LePage made early surveys and maps of the Canadian Northwest. With his bride, Bernadette, he farmed for a time in Saskatchewan before applying his artistic talents to landscape design. In 1918, he built a mosaic-style retaining wall in Butte, Montana’s Columbia Gardens, which was demolished to make way for open-pit mining in 1973. Causland Memorial Park is LePage’s only known remaining design work. 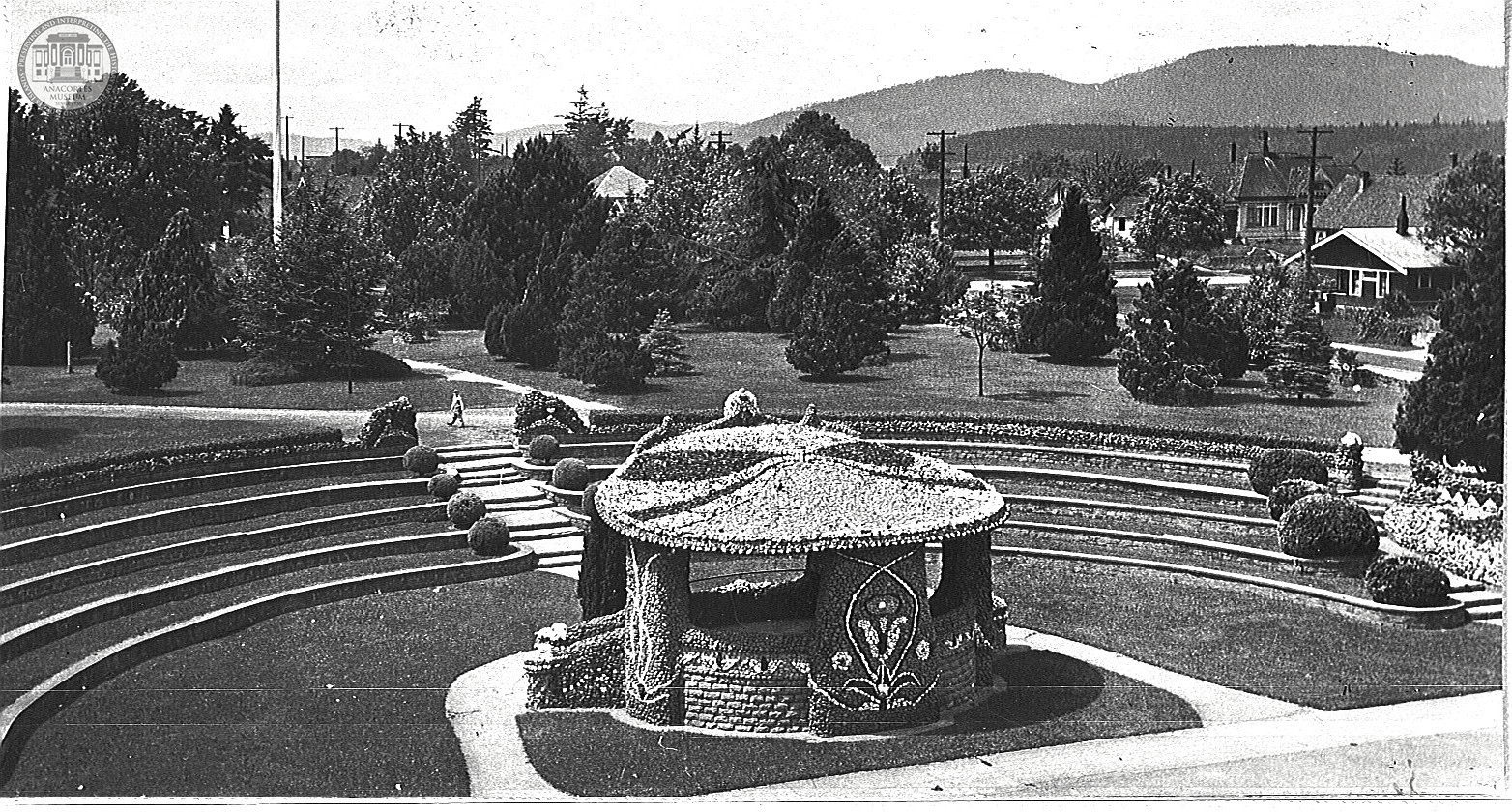 In 1926, Causland was extended westward to fill the entire block; at long last the park felt like a whole. A donation from the U.S. Government of a WWI-era field cannon was another fitting addition in 1926. Beautification efforts continued into the 20th century with much effort being put into cultivating the plant population. A city beautification committee was formed under Anthony Mustacich’s tenure as mayor of Anacortes (1958-1960) and helped to lead a June 1960 community-driven landscaping project at Causland, adding many new shrubs and flowers to the park grounds. Community leaders were particularly interested in planting azaleas in the park. One of the organizers of the project would claim that they planted 268 azaleas in one day. 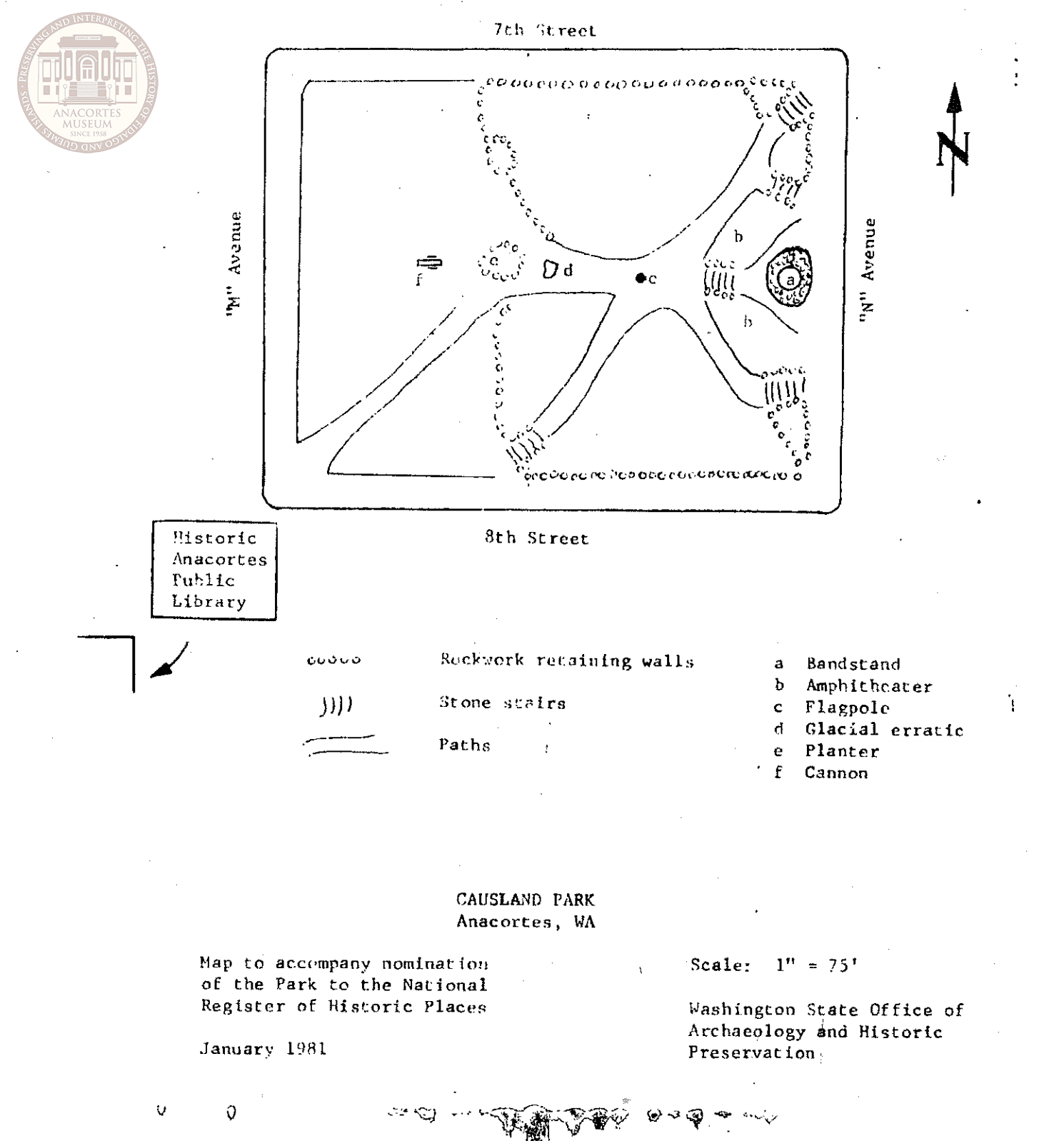 In early 1980 Anacortes Parks Director, Steve Colby and historian J. H. Vandermeer made a comprehensive appeal to the U.S. Department of Interior to add Causland to the National Register of Historic Places. The two explained the cultural significance of the park not only to Anacortes but to Washington State as a whole. A year later in 1981 Causland was officially added to the list as its third Anacortes location after the W.T. Preston and Carnegie Library.

“Within the Park area, the natural terrain allowed for grassy bench-land and green valleys. Therefore, the rock walls were higher in some places and lower in others. This variation in stature lent itself to a special beautification by shrub and tree…

...As a background, there were colored rock designs rambling up the sides and over the tops of walls, alternating the vivid hues of rocks to merge harmoniously with the blossoming shrubbery, flowers, and broad-based evergreens. This is the way it was in the beginning and as it is today.” - National Register of Historic Places - Nomination Form

During the mid-1980s many in town started to ask a question. Where were the memorials for the veterans of wars after WWI? The local Veterans of Foreign Wars committee decided it was imperative to add memorials for those who fought in World War II, the Korean War, and the Vietnam War. The VFW alongside a few other local donors pooled their money together to create three memorial plaques which were originally installed in the ground directly in front of the bandstand. Later on Veterans Day 1988, the original plaques were replaced with the memorial wall seen below.

“It was kind of a dream of mine to see this fulfilled, to give credit for those guys that fought in the wars.” - George Olson, Senior vice-commander of VFW Post 4481. 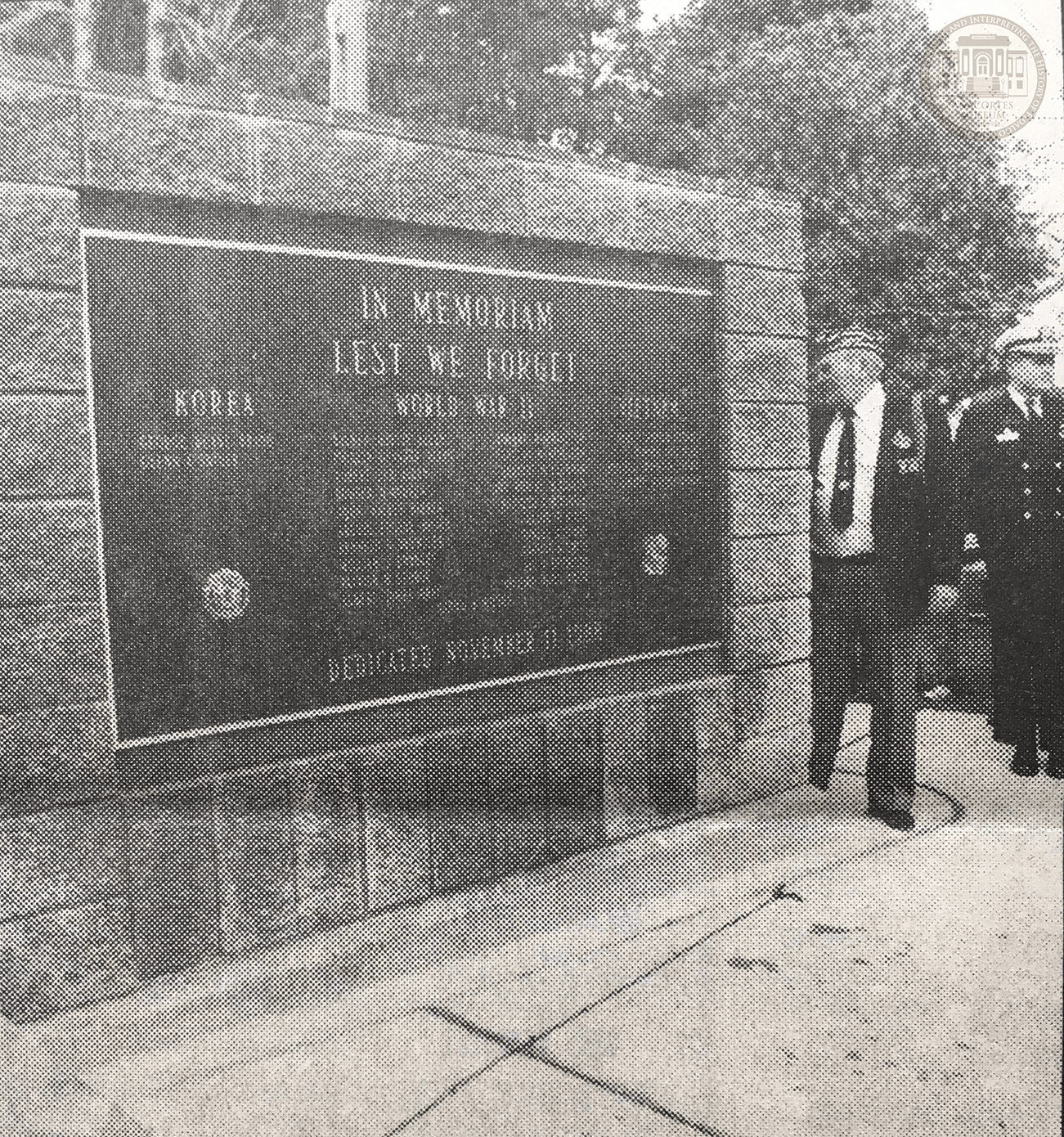 A few other important additions to the park include a black walnut sprig which was allegedly gathered from a tree near George Washington’s tomb, a Japanese cherry tree donated by the Daughters of the American Revolution, and the large 30-foot flagpole donated by the Kiwanis Club on Flag Day 1996.

Leading up to the turn of the century, a group of veterans in the community noticed the stonework around the park was beginning to crumble. They helped fund a new restoration effort by stonemason, Bryan Elliott to repair the park. Work with Elliott started in 2000 and has been ongoing since then. The City of Anacortes plans to return the restored cannon and install a new memorial wall before the 2021 Causland Park Centennial. 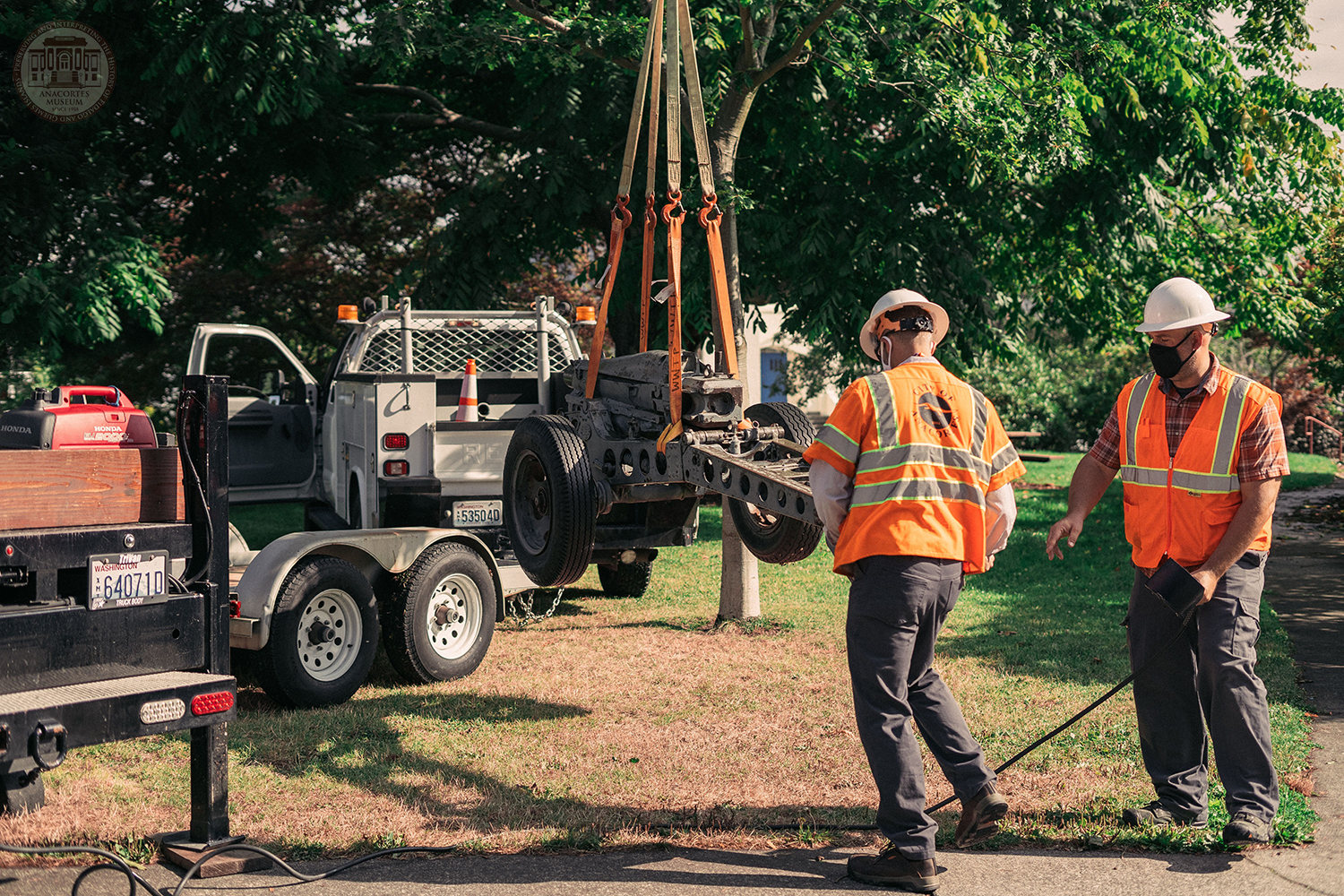 Learn more about the history of Causland Park's Cannons with our interactive timeline below!