History of 4th of July Celebrations

Anacortes has a long history of hosting grand Independence Day celebrations. In fact, one of the first acts of the city’s founders was to throw and elaborate Fourth of July bash and invite all of Puget Sound. That was in 1890 - 10 months before the boomtown officially became a city.

Patriotic celebrations have had their ups and downs over the decades, but today, thanks to the work of many volunteers, July 4th festivities are more popular than ever.

Still, it would take quite an effort to top that first Fourth in 1890. In his book "Pictures of the Past," Wallie Funk describes it: 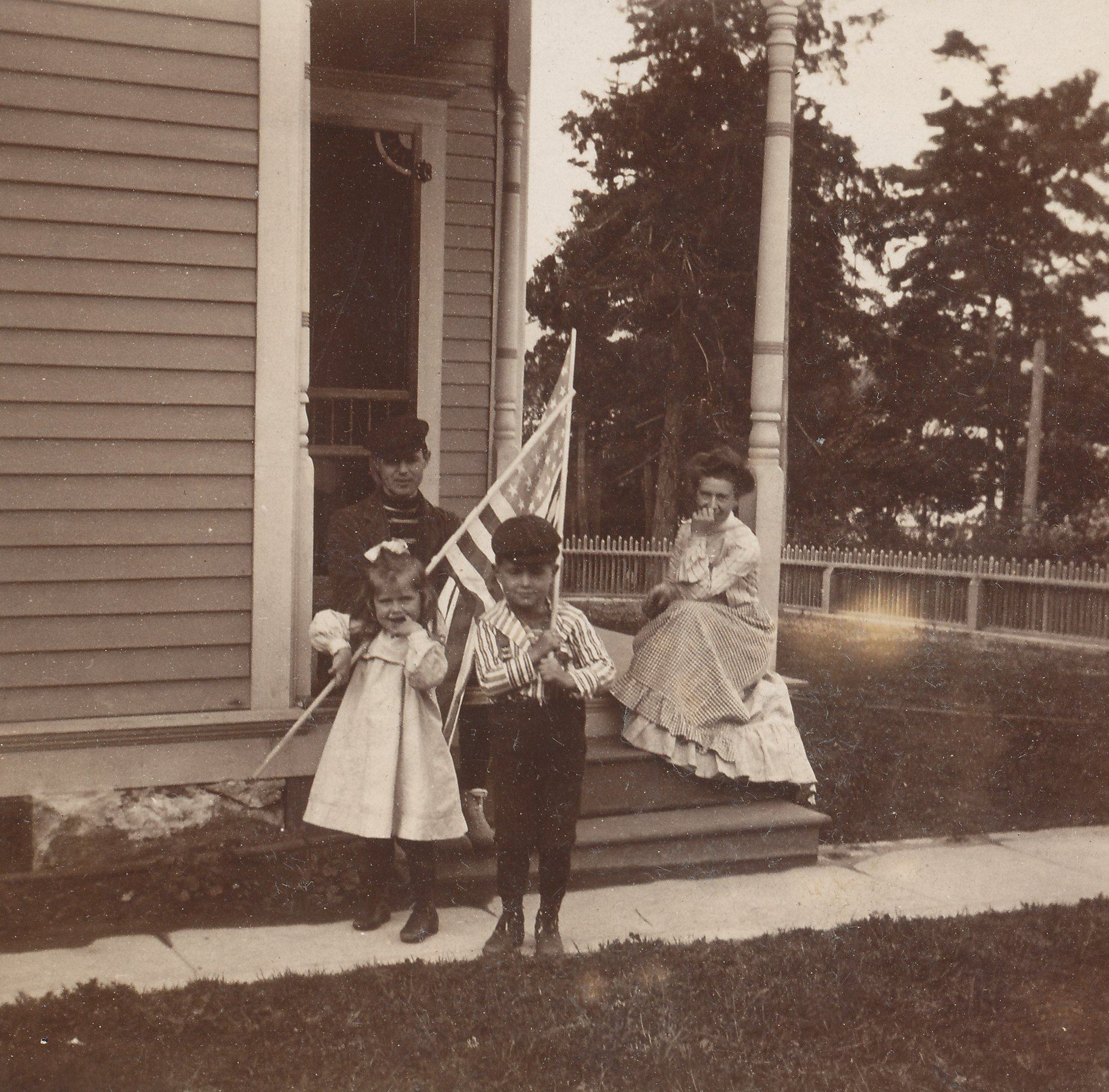 "The town marked the Fourth of July with a celebration that drew thousands of visitors from as far away as Tacoma and Victoria. At that time, it was the largest such event held on the Sound and won for the boom-driven city great praise for its historic gala. The ’grand parade,’ including four bands and horse-drawn floats, was photographed by D.B. Ewing as it headed south on planked streets and sidewalks which covered P Avenue (now Commercial). It was a memorable day that concluded with a spectacular fireworks display that priced out at $500 - all of it from local pockets."

The 1890 athletic competitions included a baseball game, 100-yard and a half-mile races, a 100-yard race just for fat men, a 50-yard sack race, a tug-of-war, catching of a greased pig, a baseball throw, wheelbarrow and potato races, a two-mile canoe race, a yachting competition with more than 20 sailboats and a firemen’s race with hose carts, 12-man teams and $25 to the winner. The community of 3,000 hosted an estimated 5,000 guests that day.

Independence Day parades and events were held regularly in the city, if not annually, until brought to a halt by the Great Depression. Civic activists and merchants such as Paul Luvera who missed the patrioti events - and the economic and morale boost they provided - came up with Marineers’ Pageant, which was held in late July for several years, starting in 1937.

There were parades, pirate girls, queen coronations, dances, a grand parade and watersports, including world-champion water-skiers, hydroplane races, tribal canoe competitions and battleships at anchor. There were also stunts that made national movie newsreels, such as a mass wedding of seven couples, and the unique and hilarious Cat-Putter-Outter-Derby.

The event stopped for World War II, made a couple of comebacks, then faded away for good in the late 1950s.

Events were somewhat less coordinated and less memorable in the next couple of decades, although fireworks at Flounder Bay were a hit with kids. Before Skyline was built, Anacortes Museum Director Bret Lunsford remembers, organizers with trash cans asked each carload of viewers to toss in donations. In 1976, Fidalgo Island Bicentennial Committee, chaired by "Mrs. Ben Hughes," organized a big, old-fashioned patriotic picnic, and the Lions Club hosted the fireworks at Flounder Bay.

Events were low key the next few years, but began to shape up in the 1980s and early ’90s, largely due to fundraising and organizational efforts led by Felicia Childs, who became known as "Mrs. Firecracker" and "Mother Red White and Blue." By the time Childs stepped down, the events had grown to include a patriotic picnic, a kiddie parade and fireworks. 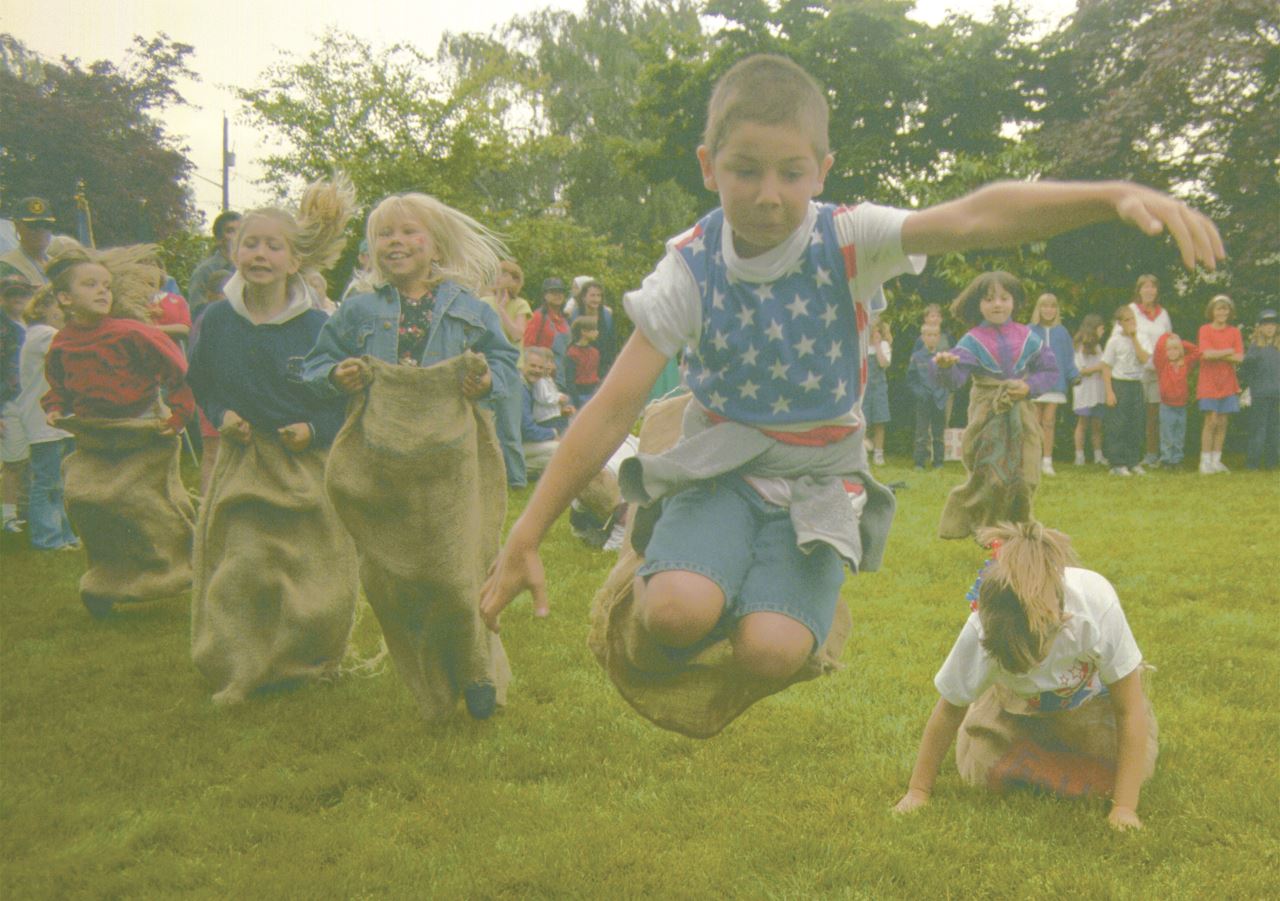 In the early 1990s the Anacortes Women of Today began to play a role in parade organization. In 1994 Childs officially handed the parade and picnic to AWOT and Donalda Wiggins, who expanded the parade to include adults, marching bands and community floats, as well as children. After the patriotic speeches at Causland Memorial Park, various service groups presented sack races, pie-eating contests and other old-fashioned games.

John Curtis of Bubba Sudz and his family assumed responsibility for the fireworks display. Merchants donated to the show, and, for many years, the Curtis family sold fireworks at a stand at the car wash to raise money for the display. Curtis, who had a pyrotechnics license, supervised the show until his untimely death in an accident in 2009. Today, funds are raised through the Anacortes Parks Foundation, which oversees the fireworks.

For over 20 years, the Anacortes American has invited everyone in town to gather before the Fourth of July parade for a mass town photo .The proceeds of town photo sales are donated to the John Curtis Memorial Fireworks display. 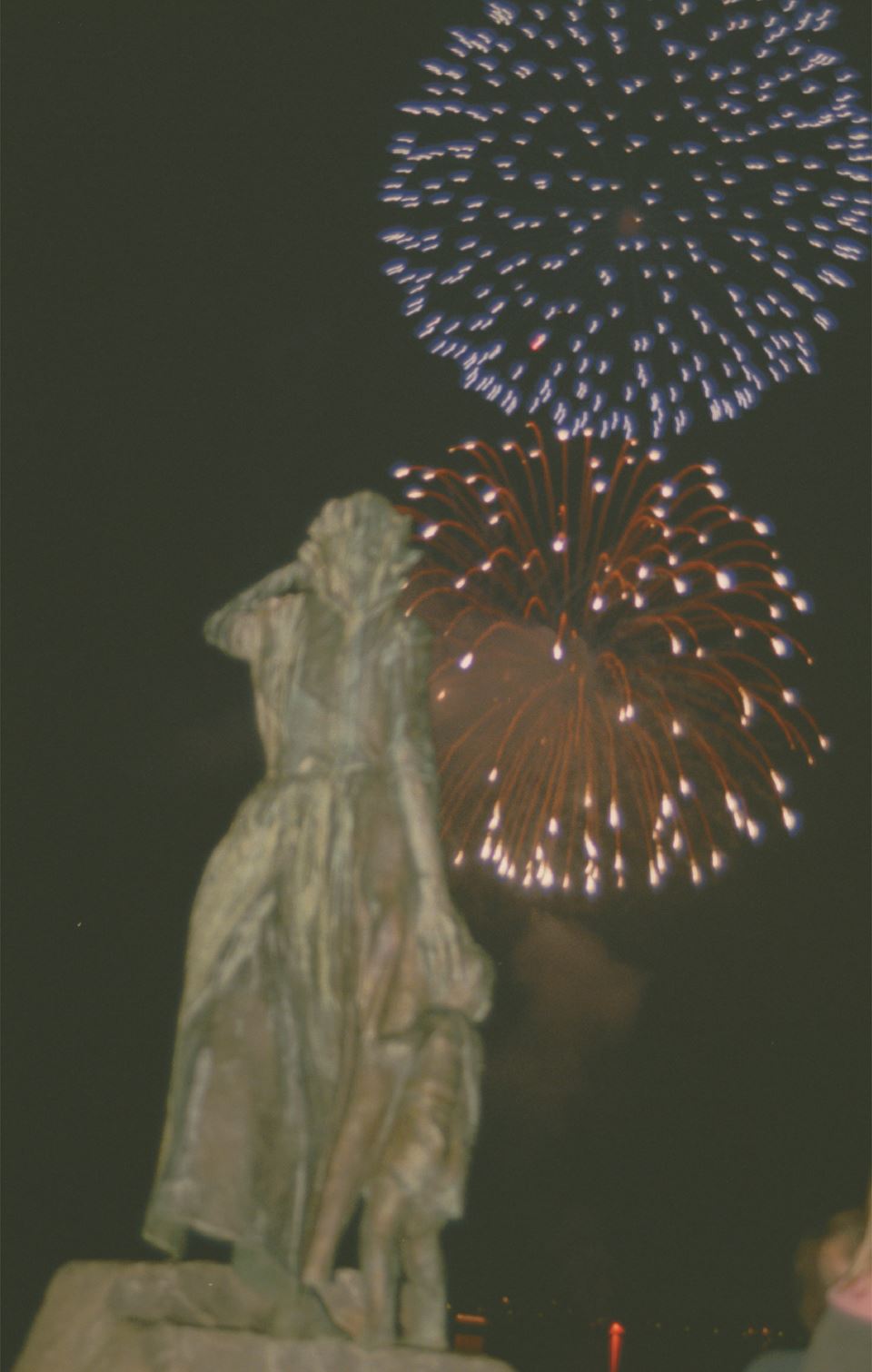 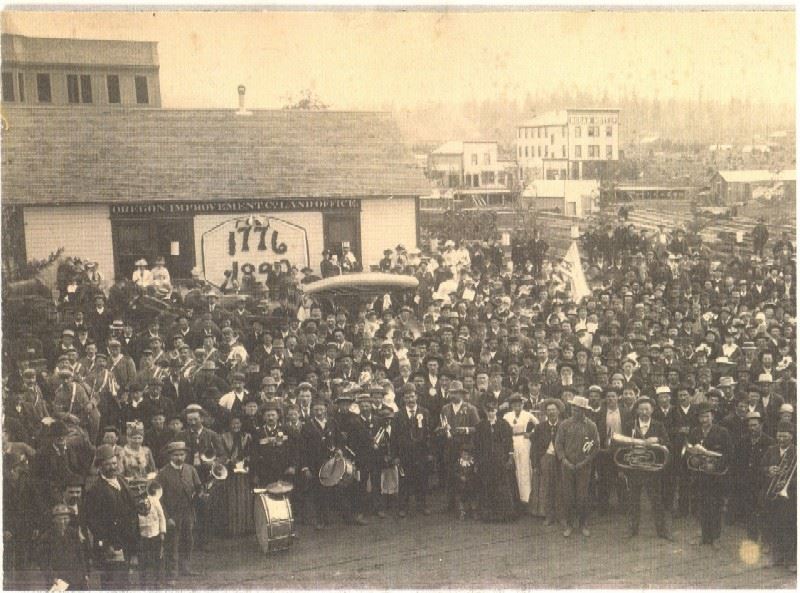 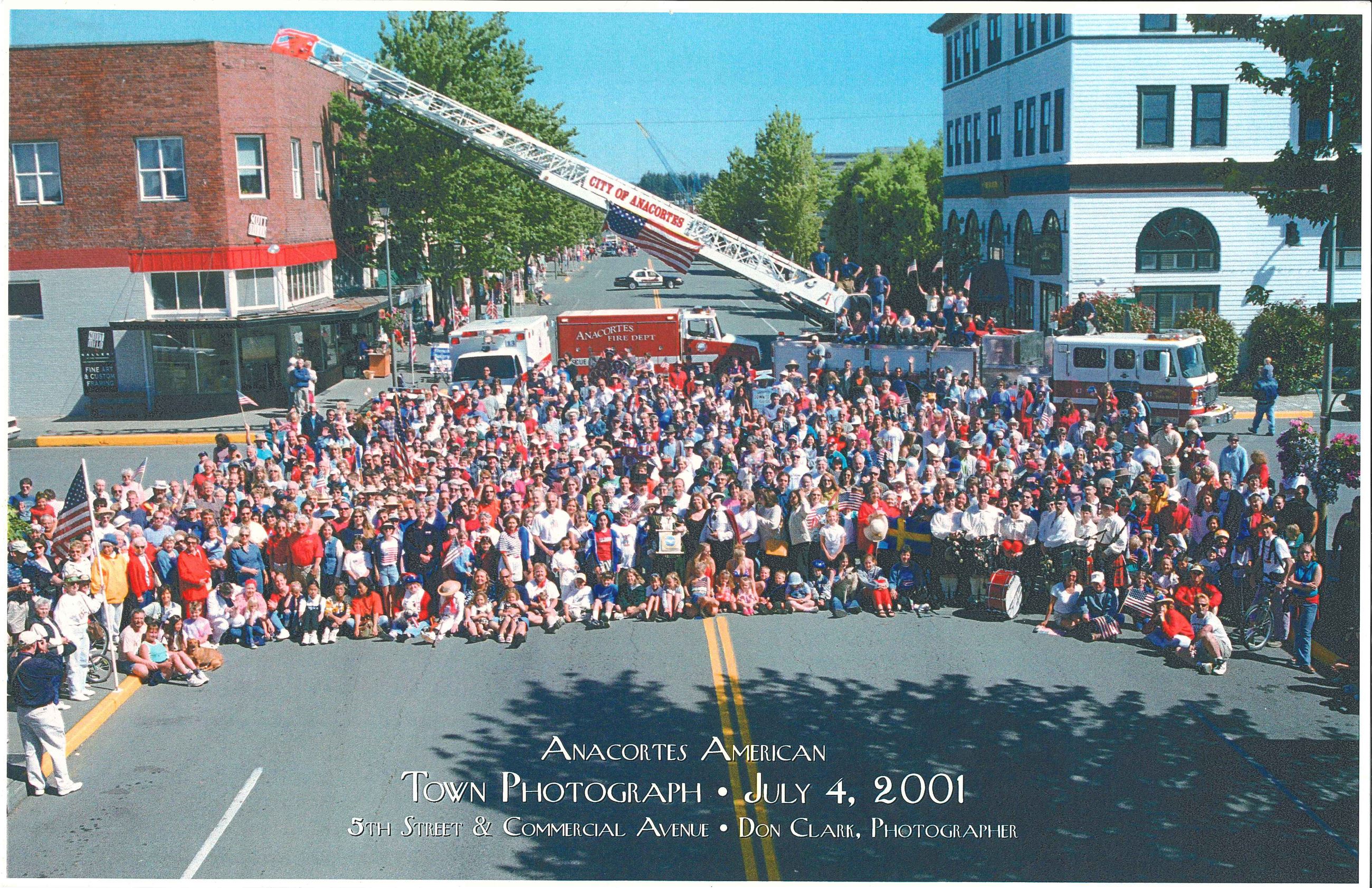 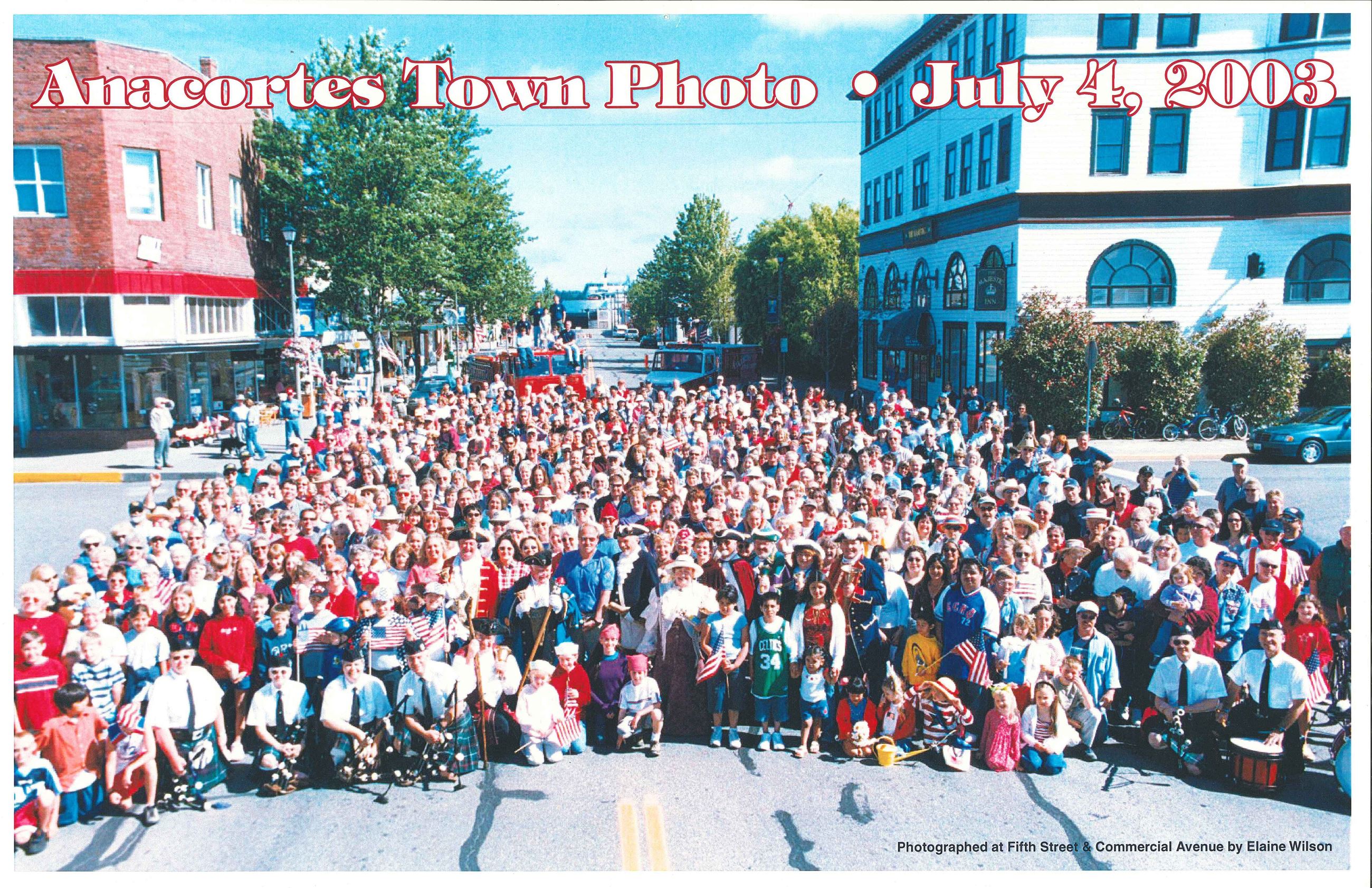 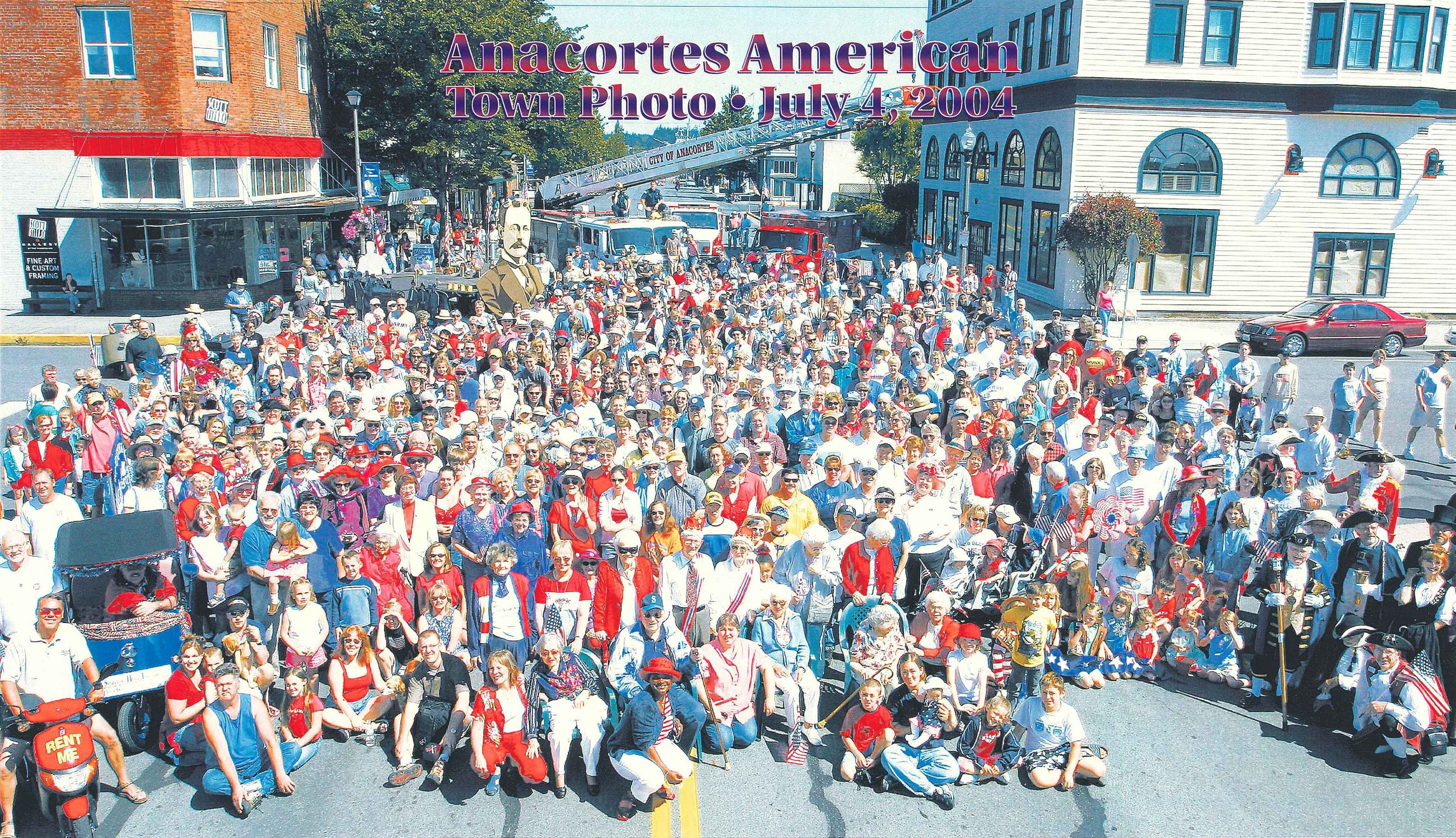 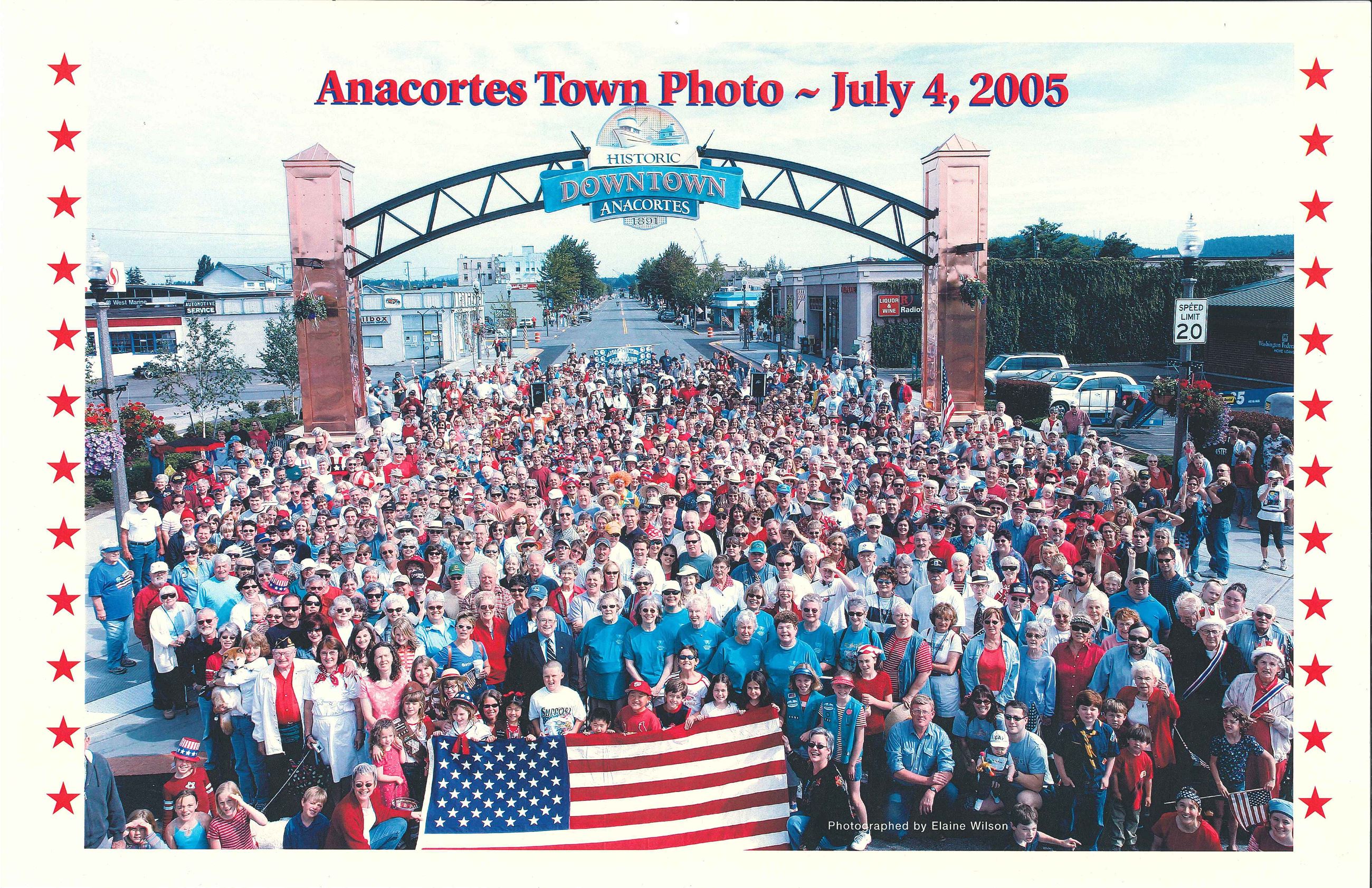 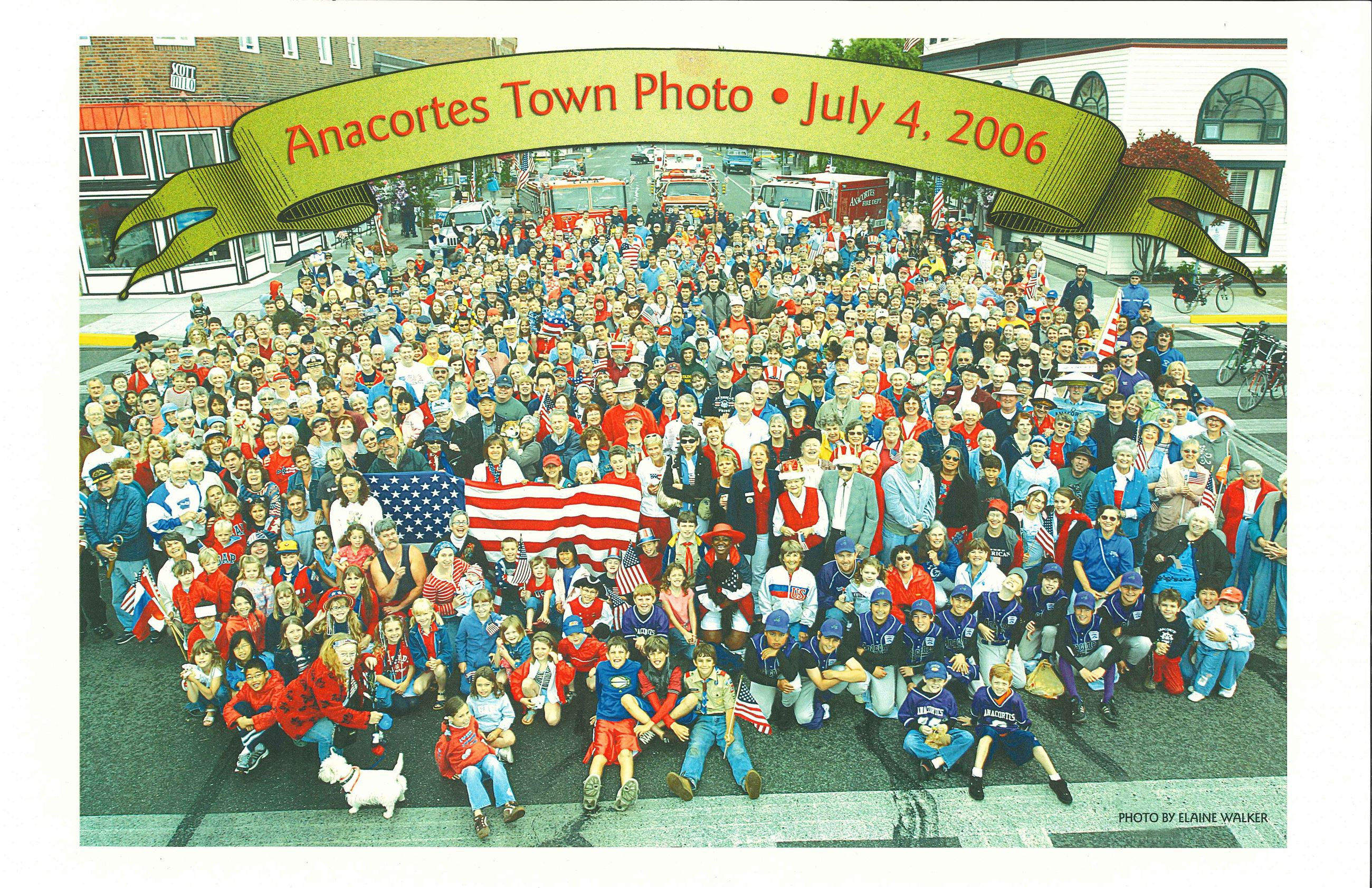 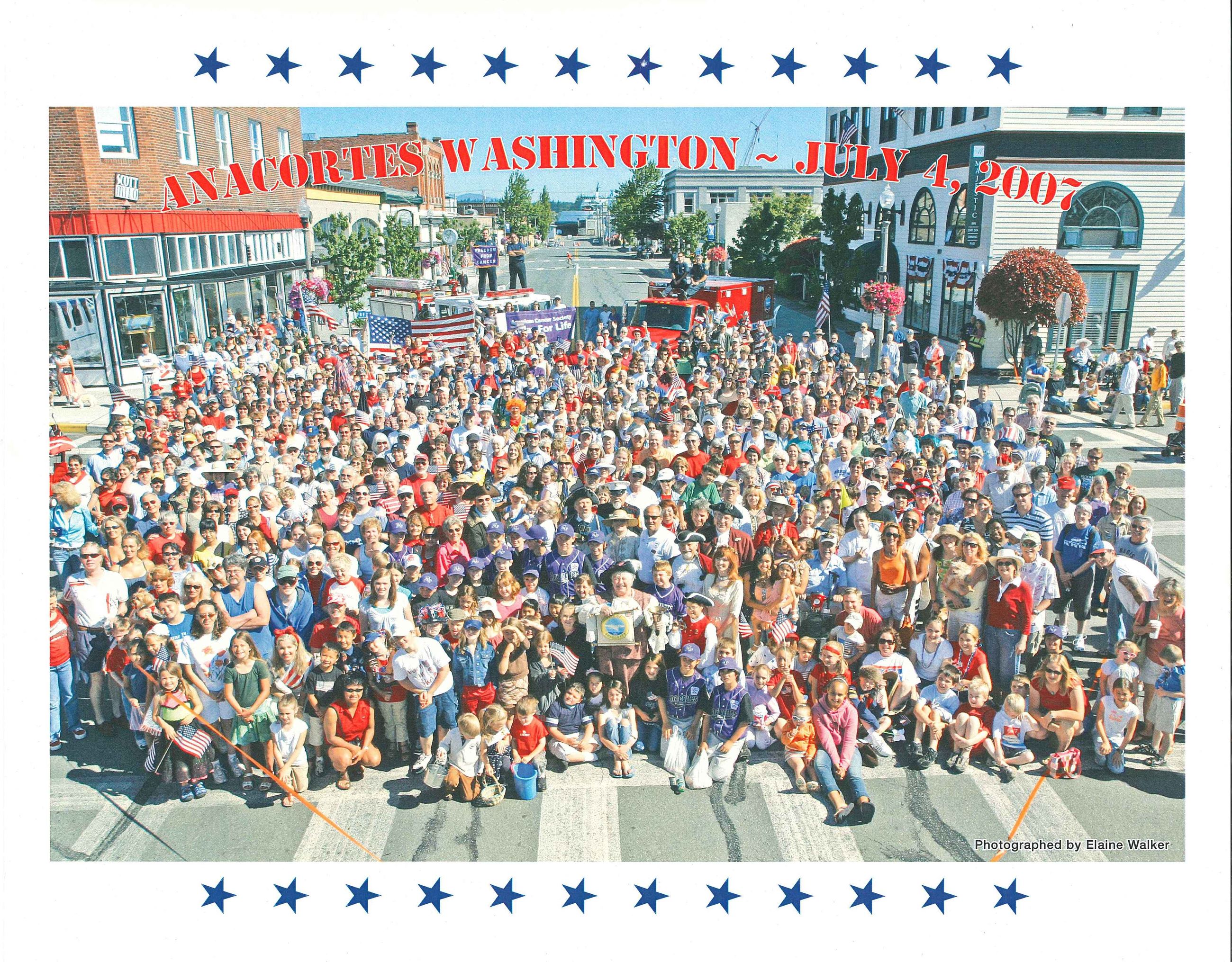 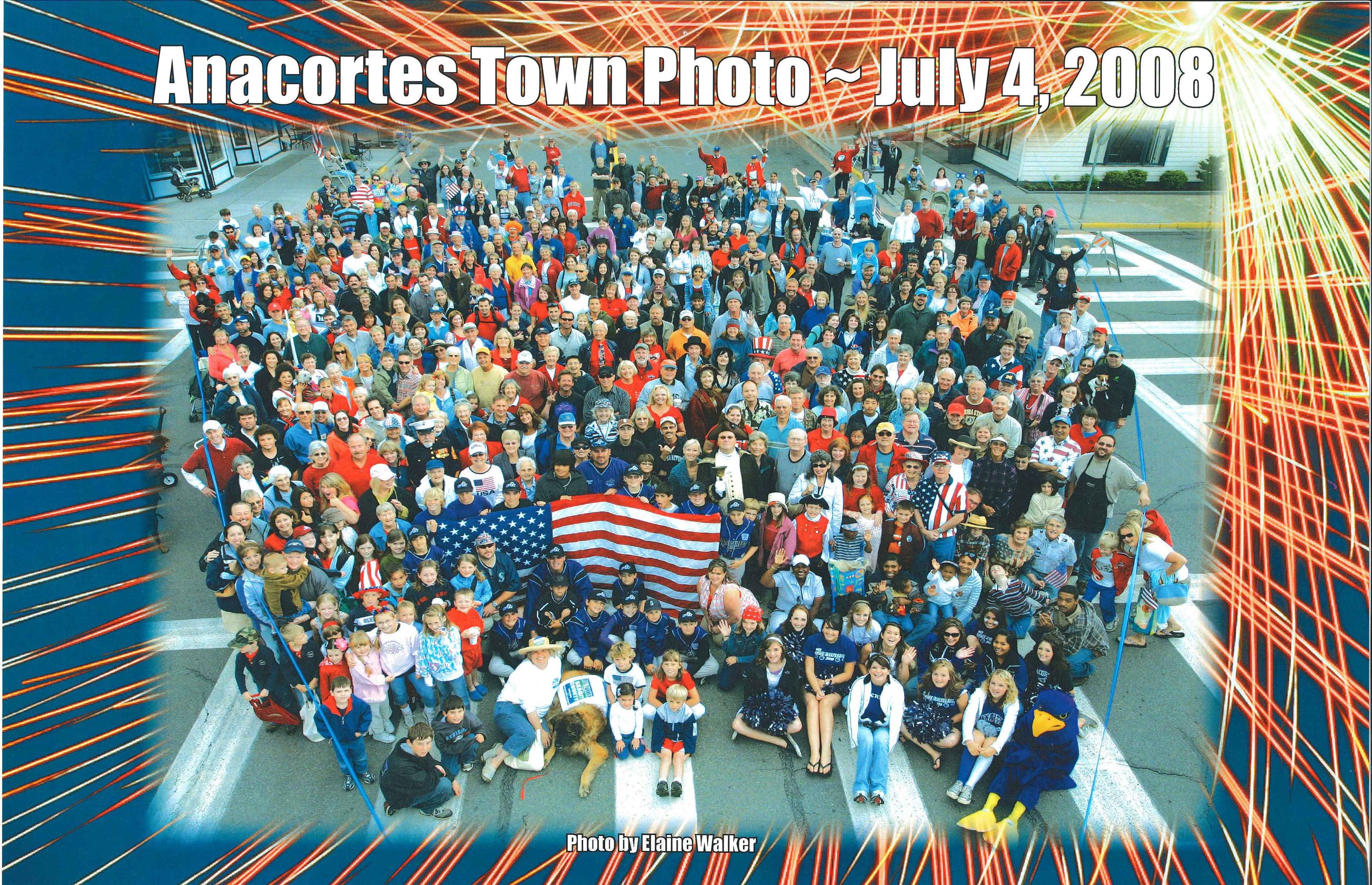